Gauteng's 104-year-old school to be revamped

One of Gauteng’s oldest schools, which had defects and was posing a danger to pupils, is being rebuilt 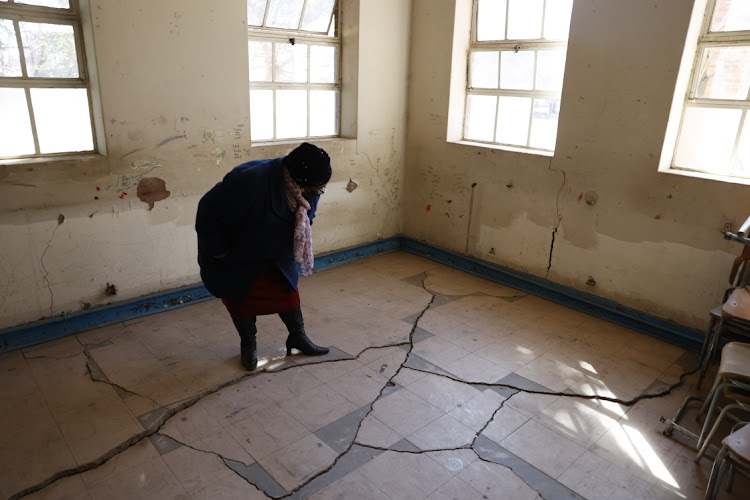 A classroom in Laerskool Kommando with cracks.
Image: Thulani Mbele

One of Gauteng’s oldest schools, which had defects and was posing a danger to pupils, is being rebuilt.

Laerskool Kommando in Brakpan on the East Rand is among the schools that MEC Panyaza Lesufi visited on Monday as pupils across the country returned to the classroom after a long break imposed by the coronavirus pandemic.

The school was built 104 years ago.

Ekurhuleni education district director Somikazi Chabalala said the problems at the school were identified last year after it was reported for being hazardous for pupils.

“Kommando is 104 years old and the walls in most of the classrooms have cracks, uneven floors, saggy ceilings and leaking roofs. The building of classrooms started on Tuesday and we are happy to see change in what was one of the worst schools in our area,” Chabalala said. 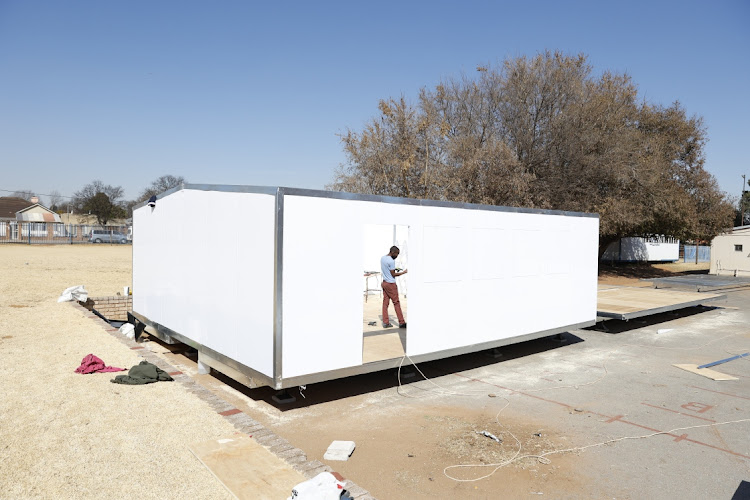 One of four prefab classrooms handed over to Laerskool Kommando by the Gauteng department of education. the 104 year old school has classrooms falling apart due to roots from trees stretching underneath the classrooms.
Image: Thulani Mbele

“We are very happy to have the MEC prioritise our schools and act on all reports that we give to him. We have now applied for [the national school] nutrition programme for this school as well after discovering that there are over 60 needy children who come from informal settlements about Brakpan.”

He said all teachers had been engaged about the importance of pushing of  harder to cover for time lost due to long school holidays.

“Our children lost half of last year and this year. We understand the load of work that they will be facing. We need to push very hard and ensure that they catch up on all that they had lost. Their education is our responsibility, the work has started.”

A different picture has emerged from Phoenix, , north of Durban, where there was high police visibility but school attendance was low on Monday.

Gauteng's education department will monitor Covid-19 infections among grade 7 pupils to see whether it is possible for all high school pupils to ...
News
2 months ago

KwaZulu-Natal education department spokesperson Muzi Mahlambi said the police were monitoring schools in the area, which were visited by MEC Kwazi Mshengu.

There were concerns arising from threats on social media about the targeting of schools in the area after violence during the recent unrest in KZN and Gauteng.

“There was no violence or disturbances in areas that we visited. People are out and about with their normal lives. That is what we observed,” said Mahlambi.

“The attendance was very low on Tuesday because parents would always want to see what happens before they release their children to school.

“We are hopeful that attendance will improve as the week progresses because the word will go out to say that nothing happened to those who came to school.”

The National Professional Teachers' Organisation of SA (Naptosa) encouraged pupils, teachers and parents in the province to remain positive and motivated.

“Naptosa welcomes all teachers and learners to the third school term. During these uncertain times we encourage learners, teachers and parents in our province to stay positive and remain motivated to conclude this school year with flying colours,” said Naptosa's Thirona Moodley.

“We are all aware that our province was a victim of violent unrest and protest action.”

At least 136 schools were vandalised, looted and damaged.

“We implore the Department of Education in this province to fast-track the repairs to infrastructure and replace furniture and other resources that were destroyed,” said Moodley.

Lesufi said pupils had received electronic tablets that were loaded with textbooks.

“We will continue to improve the quality of education, infrastructure and any other educational needs for children in all our schools,” he said.

The police were out in force as schools opened in Phoenix, north of Durban, on Monday – but attendance by pupils was poor.
News
2 months ago

Covid-19 in children: the South African experience and the way forward

In SA there is a case for the expedited vaccination of children with underlying conditions and older teens and adolescents based on burden of cases ...
News
2 months ago