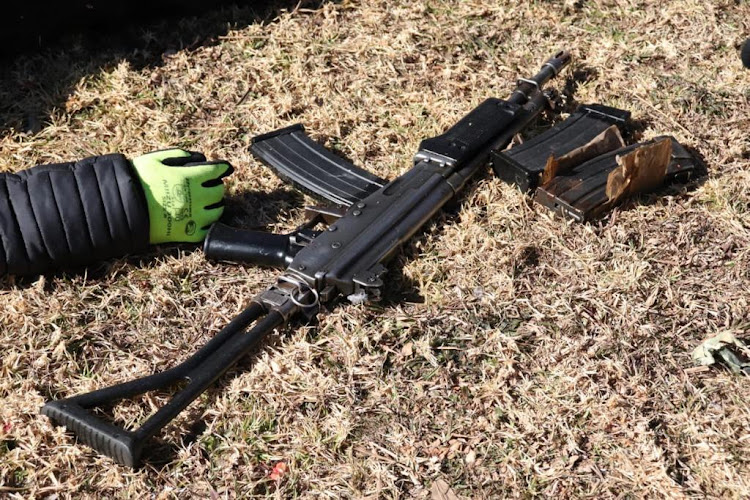 Police said the firearms and ammunition recovered are believed to have been used in serious and violent crimes.
Image: SAPS

Gauteng police recovered more than 50 unlicensed firearms, including high calibre automatic rifles, and more than 680 rounds of ammunition during an operation at the weekend.

Police spokesperson Capt Mavela Masondo said the firearms and ammunition were suspected to have been used in serious and violent crimes.

This past week also saw more than 1,300 suspects arrested.

Masondo said officers collared two “most wanted” suspects from Olievenhoutbosch and 19 others. The group were found in possession of four AK-47 rifles, three R5 rifles, two pistols and ammunition.

In Bophelong, Sedibeng, a 36-year-old man was arrested after threatening his ex-wife with an unlicensed firearm.

“It is reported the suspect went to the house of his ex-wife, pointed at her with a firearm and ordered her to get into the vehicle. She managed to escape and alerted the police, who responded promptly,” Masondo said.

In Mamelodi East and Eikenhof two suspects were arrested with unlicensed firearms and live rounds.

“These arrests and confiscations are a clear indication that criminals cannot do as they wish in our province, and that together with other law enforcement agencies we will continue to squeeze the space for criminals.

“We remain committed to creating a safer Gauteng and will continue to curb the proliferation of illegal firearms,” said acting provincial commissioner Maj-Gen Tommy Mthombeni.

An army officer has been arrested for allegedly being part of an armed gang that pulled off a cash-in-transit heist at a petrol station in Oudtshoorn ...
News
11 months ago

However, other claims made by Gun Owners SA, which opposes amendments to the Firearms Control Act, are either incorrect or there is no available data ...
News
11 months ago
Next Article