'I don’t even count myself any more — I work for my family': Waitress on loss of income during lockdown On Monday morning, Melokuhle Ncube, a waitress in Parkhurst, Johannesburg, was washing windows and mopping the floor of Jolly Cool, as they eagerly prepare to reopen on Tuesday, after the alcohol ban was eased.

The restaurant, which relies heavily on its alcohol revenue, has been shut for weeks during alert level 4 of the Covid-19 lockdown regulations. While restaurants were allowed to resume serving sit-down meals halfway through this period, the sale of alcohol was prohibited for a month.

The regulations gazetted overnight state that licensed establishments must ensure no alcohol is consumed on their premises after 8pm.

“We’re excited about another opportunity to work. Things have been hard since we couldn’t really make enough money to survive. It was better because of the money from the government [UIF/Ters]. It helped a lot because I wasn’t working, but I could cover my basics costs and survive,” Ncube told SowetanLIVE's sister publication TimesLIVE.

“The money wasn’t enough but it was better than nothing.”

Humanitarian funds of R170,000 meant for the distribution of food parcels were funnelled to a church instead.
News
1 year ago

Ncube said she was a breadwinner at her house of four, even though she did not earn enough.

“I don’t even count myself any more — I work for my family and child. As long as they are good, I feel good too. My personal upkeep is no longer a priority. The lockdowns have been devastating, I wish we didn’t have to go through it.

“I have been battling with debit orders. I’m heavily indebted right now because at some point I had to prioritise food and rent,” she added.

Sphamandla Sibanda, a barman at the Taphouse in Johannesburg, said he wishes there was something positive to say about the lockdowns.

“I was lucky to be paid throughout the breaks, the little that I had kept me going. There’s nothing good that came out of this, our lives are disrupted and I don’t see how we will pick up,” he said. 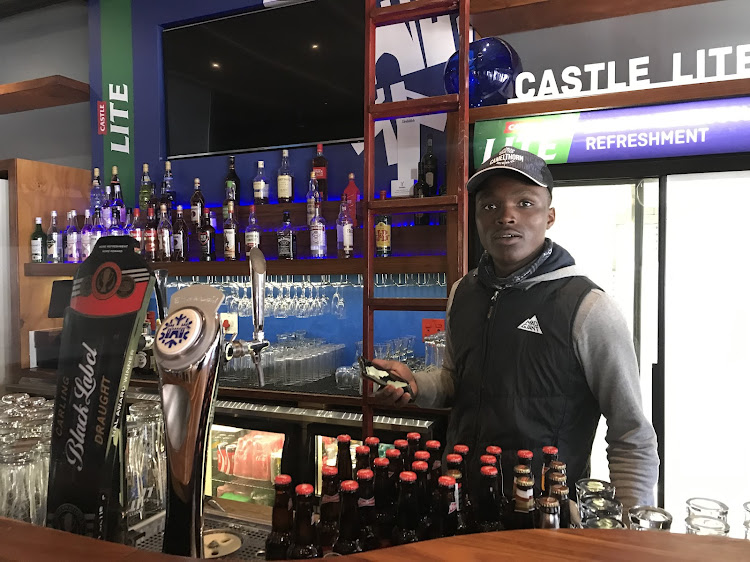 Sphamandla Sibanda, a barman at the Taphouse in Joburg, prepares for reopening on Tuesday.
Image: Kgaugelo Masweneng

“I didn’t get to register for Ters because I didn’t get a pay cut, but I know people who have. It was better than nothing.

“Our industry has suffered greatly and we only want to work and feed our families.”

Jolly Cool manager Mandla Nyoni said he was geared up for the new regulations.

“We can’t do anything without the sale of booze. Food doesn’t bring in that much money, to be honest. We had to close down and wait out the storm. Our staff are struggling to keep up with their living expenses. It’s a crisis that trickles down to society at large.

“I believe hunger is stronger than corona,” Nyoni said.

He questioned the effectiveness of the lockdown booze bans and the public adherence to the measures.

“In malls, people are mingling and causing the spread of the disease. Some are even drinking regardless of the ban. People make a plan underground.”

On Saturday, TimesLIVE reported that the Tourism Business Council of SA (TBCSA) had called on the president to ease restrictions, as it had seen significant financial losses in the last month.

“Airlines have grounded their fleets, B&Bs are closed, some branches of car rental companies are closed, and entrepreneurs in township and rural tourism are on their knees. Continuation of current restrictions will result in major job losses and increase the unemployment rate,” the council said at the weekend.

Will the government reintroduce the R350 grant? Presidency clarifies

South Africans still impacted by lockdown restrictions, including those working in the entertainment industry, are eligible to apply for the Covid-19 ...
News
11 months ago
Next Article