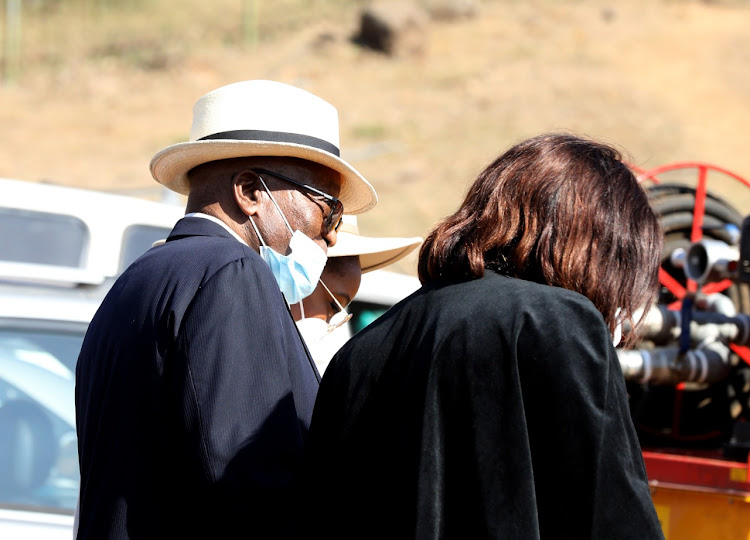 Former president Jacob Zuma has returned to the Estcourt prison to resume his 15-month sentence for contempt of court.

This after he was granted compassionate leave to attend his younger brother’s funeral in Nkandla on Thursday.

Department spokesperson Singabakho Nxumalo said: “He is safely back in custody.”

Zuma’s younger brother Michael died after a long illness a few days after Zuma started his 15-month prison sentence for contempt of court.

In a statement on Thursday morning, Nxumalo said the permission was granted under section 44 (1)(a) of the Correctional Services Act.

Zuma, who is classified as a “short-term low-risk inmate”, was seen in pictured wearing a white fedora hat and a formal blazer.

In granting him permission, the department had to consider various elements including what activity Zuma wanted to attend, how long he would be temporarily released and the security risks involved as he still needed to be protected by its officials.

While the funeral service took place under heavy police presence, the Zuma family expressed gratitude to the state for allowing the former president to pay his last respects to Michael.

Zuma’s brother Khanya, 77, told TimesLIVE that the family was delighted to see Msholozi.

“He arrived in the early hours of Thursday morning and I got a chance to speak to him at the funeral. He was his usual jovial Gedleyihlekisa, but he was hiding the hurt. He has always been like that. He does not show that he is in pain,” said Khanya.

This translates to “I am coming back soon, my brother”.

When there is a funeral, the men in the family usually wake up at 4am to dig the grave to prepare for the burial, said Khanya.

However, this time, “we used a TLB machine”.

“Then we slaughtered a cow because we were burying the head of the family. When we were burying, men wearing full personal protective equipment were the ones who did everything,” he said.

Zuma’s wives — including Sizakele MaKhumalo-Zuma, Nompumelelo MaNtuli-Zuma and ex-wife and mother of his children, Cogta minister Nkosazana Dlamini-Zuma — were in attendance. It was only Tobeka Madiba-Zuma who did not attend, Khanya said.

The family will begin a three-month mourning period.

“We are hoping he will come back to do the cleansing ceremony,” said Khanya.

Zuma’s eldest son, Edward, also thanked the government for allowing his dad to leave prison for the funeral.

“We want to thank and appreciate whoever took the decision to grant ubaba compassionate leave. He was able to bury his brother and we really were very happy that he was present, though he was very emotional,” he said.

When asked how Zuma was doing in jail, Edward said: “He is doing too well for a prisoner. He is in top spirits and adhering and doing whatever he is told to do, like all the other inmates. I am sure that his prison warder is the happiest person because he is so well behaved.”

He said there were a few things that his father was not happy with, “but we are OK with it, so long as they do not kill our father because that is a suspicion that we have”.

When asked what made the family believe that Zuma was not safe in the prison, he said: “There have been many things that they have been doing that point us to believe that they want this man dead. They do not want to see him alive and we want to say that they must stop doing what they are doing because we aware of it.

“We want our father to come back very healthy and alive. We want him back in one piece, just like when they took him, because it won’t be nice if something happens to him.”

Edward said his father did not make any remarks during the funeral service because, “remember he is an inmate, he came to mourn with the family after his brother’s death, so we respected that and we couldn’t allow him to speak, he had to sit and listen to his brothers”.

Former president Jacob Zuma has been given permission to leave prison to attend his brother's funeral in Nkandla.
News
11 months ago

He said the family was not happy with the heavy police presence in Nkandla as it made them “feel like they were treated as though they were criminals”.

“We are asking ourselves what were [ministers] Bheki Cele, Ayanda Dlodlo and Nosiviwe Mapisa-Nqakula thinking? There was no threat. We know that by incarcerating former president Jacob Zuma, they want to frustrate the family, and we are saying we are not going to be frustrated.”

He would not be drawn on commenting on whether Zuma had been offered a presidential pardon.

“That is a matter for another day. I cannot talk about that until the lawyers discuss that with you. But they are just exercising a very futile exercise.”

Addressing the recent looting spree which started shortly after his father was arrested, Edward said: “As a family it has never been our intention [to cause instability]. Our intention is for justice to prevail.

“What happened is very wrong, we denounce it and it should never happen again. These were just mere opportunistic events that occurred under the disguise of [former] president Jacob Zuma.

Jacob Zuma arrived in Nkandla on Thursday to attend the funeral of his younger brother Michael.
News
11 months ago

Sihle Zikalala has lauded the department of correctional services for allowing former president Jacob Zuma to attend his late brother's funeral on ...
News
11 months ago

Mike attended Mathungela Primary School and later worked at various factories across Johannesburg and KwaZulu-Natal.
News
11 months ago
Next Article