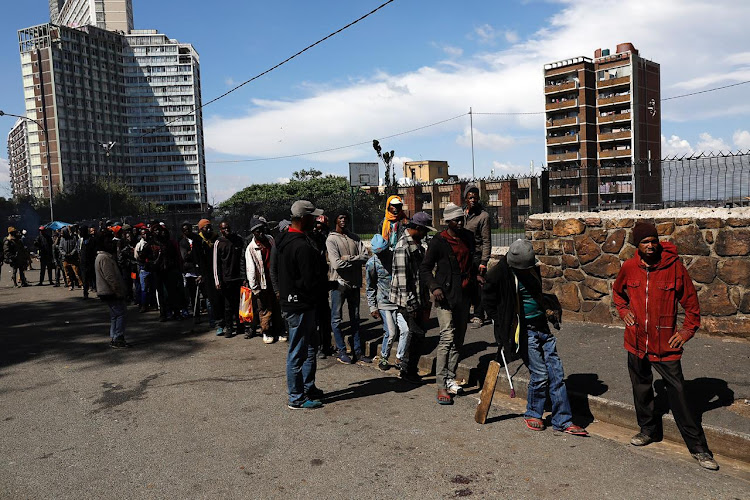 People queuing for food parcels in downtown Johannesburg. Politicians' credibility is so damaged that their pleas to the poor to stop looting were 'but a cruel joke', says Anglican archbishop Thabo Makgoba.
Image: Alon Skuy

Anglican archbishop Thabo Makgoba said the recent violent protests and looting in KwaZulu-Natal and Gauteng during the coronavirus pandemic had damaged the credibility of SA's politicians.

This damaged credibility, he said, was so bad that their pleas to the poor to stop looting were “but a cruel joke”.

Makgoba was speaking at a virtual 66th session of the Synod of the Diocese of Cape Town on Thursday.

“We have seen unmitigated corruption and looting from the public purse, corruption which amounts to theft from those who are most vulnerable, looting which has so damaged the credibility of politicians that last week’s appeals to the 'have-nots' to stop looting from the 'haves' were but a cruel joke,” he said.

Makgoba added: “The events of the past two weeks demand that, as leaders and followers, we need to reflect deeply on what our country has become. We cannot go on as we are. We need to re-set our compasses and choose a different direction.”

He said though the recent events might have been set off by developments around our former president, the speed at which the chaos spread spoke to the ills and the toxicity of our divided society.

Makgoba condemned “unscrupulous people” who have profited from the pandemic.

“Those wedded to a capitalist model have to acknowledge that our current financial and economic systems are not serving the common good; they are creating joblessness and inequality, to the extent that unemployment is running at 32.6%, youth unemployment is 46.3%, and the World Bank says we are the most unequal country on earth. We have to recommit to closing the gap between the excessively rich and the debilitatingly poor, ” said the archbishop.

“Let us emulate the courage of those, in SA, in the US and elsewhere, who have taken up the struggle for recognition that black lives do matter and that we need to build a society and an economy in which that is fully reflected.”

He passed condolences to the families of those who had died of Covid-19. “We pray for those who are grieving or suffering as a result of death, losing relatives and friends, and for those who have lost their jobs or had their wages cut,” he said.

Authorities are busy recovering a mountain of stolen goods after last week's looting spree in KZN and Gauteng.
News
1 year ago

The violent protests and looting that broke out in the wake of former president Jacob Zuma's incarceration has cost the KwaZulu-Natal economy R20bn.
News
1 year ago
Next Article