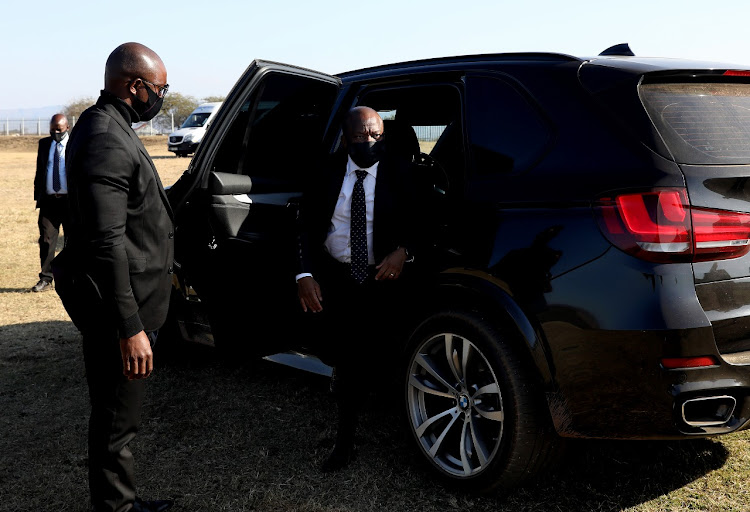 KZN premier Sihle Zikalala at the funeral of Michael Zuma in Nkandla on Thursday, where he met with former president Jacob Zuma.
Image: Sandile Ndlovu

Michael Zuma, 77, died on July 11 after battling an illness for almost seven years.

His body arrived in a hearse at his KwaNxamalala home on Thursday morning and was laid to rest at a private funeral attended by his older brother, who is now serving a 15-month prison sentence at the Estcourt Correctional Centre.

“He is in good health, in good spirit. He came to be part of the funeral and pay his last respects to his younger brother.

“I think we should applaud and thank the correctional services for ensuring that he participates in the sending off of his younger brother,” he said.

KwaZulu-Natal premier Mr @sziks says the former president is well and in good health@PresJGZuma was granted compassionate leave by the Department of Correctional Services to attend the burial of his brother, Michael in #nkandla.#kzn#ZumaArrest@TimesLIVE pic.twitter.com/oosdLFldoY

Zuma began serving his sentence on July 8, having handed himself over to authorities at Estcourt after failing to appear before the Zondo commission of inquiry into state capture.

He is expected to return to the correctional facility later on Thursday.

Former president Jacob Zuma has been given permission to leave prison to attend his brother's funeral in Nkandla.
News
4 months ago

Jacob Zuma arrived in Nkandla on Thursday to attend the funeral of his younger brother Michael.
News
4 months ago
Next Article