As vandalism and theft cause the lights to go out, Eskom has urged South Africans to help protect its besieged infrastructure by reporting criminal activity. File photo.
Image: Times Media

Eskom has called on South Africans to report thieves and vandals after three separate  incidents in a week that left a Johannesburg suburb without power for a day and sent six electricity pylons tumbling to the ground.

In the first incident, copper tubes were stolen from a pressure box in Edenvale. The cable ends subsequently exploded, leaving residents without power for more than 20 hours, the utility reported on Thursday.

In a second incident, near the mining town of Westonaria, a suspect was arrested after he was caught stealing structural components of transmission pylons.

“This compromised and weakened the integrity of the pylons since the structural members have a mechanical function to support the pylons,” Eskom said.

“This resulted in the collapse of six towers.” 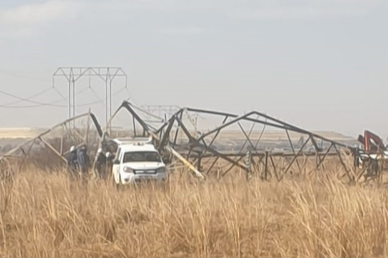 Transformers were stolen at another unnamed location, leaving residents of the surrounding community without power.

“These criminal acts do not only affect Eskom, but they also affect businesses and our customers, which has a negative impact on the economy,” the utility said.

SA has been affected by metal theft for many years, but the scourge accelerated during the hard lockdown in 2020 and has been worsened by rising unemployment.

While easy targets such as privately-owned mining headgear have previously been targeted, state-owned assets such as electricity pylons, manhole covers, guardrails on bridges and overhead power supply cables for electric trains have also been hard-hit.

Much of Gauteng's commuter rail network was stripped by cable thieves during the months after the hard lockdown ended, partly as a result of Passenger Rail Agency of SA (Prasa) assets being unguarded after a dispute between the agency and security companies.

Many stations were also plundered and vandalised beyond repair.

As a result of cable theft, commuter train operator Metrorail has been forced to hire diesel locomotives to haul trains on the few routes it now operates in Gauteng.

Eskom says it may need to implement load-shedding at short notice on Thursday, due to high usage of electricity during the cold snap coupled with the ...
News
9 months ago

Eskom wants South Africans to use electricity sparingly.
News
9 months ago
Next Article