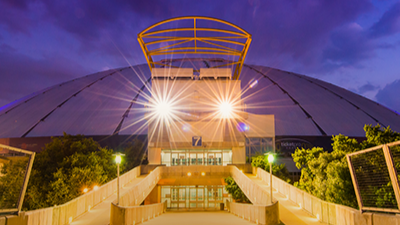 WeBuyCars has purchased the TicketPro Dome. The secondhand car giant will transform it into a supersized showroom capable of holding about 1,500 vehicles.
Image: Ticketpro Dome

WeBuyCars confirmed on Tuesday it has purchased the TicketPro Dome in Northgate, Johannesburg, from the Sasol Pension Fund. This deal will allow the country’s biggest secondhand car dealer to increase its footprint within the greater Johannesburg area with an innovative sales space capable of storing about 1,500 vehicles.

“Apart from cementing our presence in northern Johannesburg, we are confident this growth path will have a positive impact on the economy,” said WeBuyCars CEO Faan van der Walt.

“We have always been proud of our roots and this next step in our expansion plan demonstrates our commitment to the SA car market which has significant growth potential.”

Opened in 1998, the Dome was originally intended to be a permanent motor showroom that would allow the public to view and test drive vehicle brands under one roof. However, this never happened and instead it became a multi-purpose entertainment venue that over the years hosted everything from live music concerts to sporting events.

Van der Walt said WeBuyCars is able to finally realise the original vision that was held for the Dome and develop it into one of the largest secondhand car dealerships in the world.

The official opening date is yet to be announced.

The SABC said at the heart of the matter was a dispute between two royalties collection bodies.
Entertainment
5 months ago
Next Article