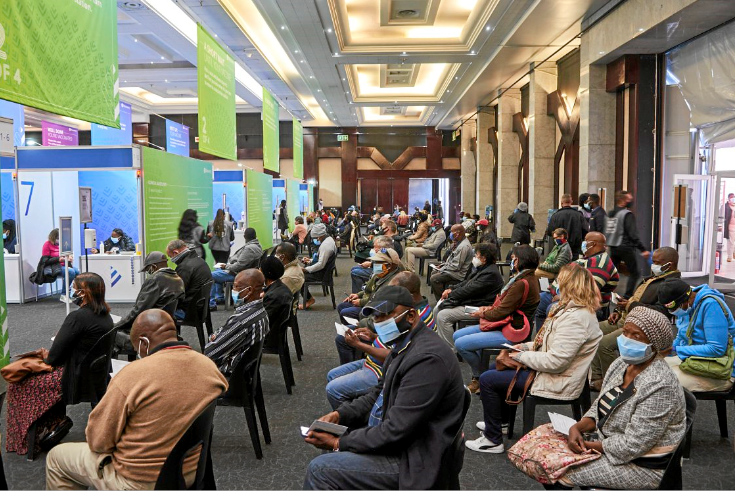 People wait for their Covid-19 jabs at a Discovery mass vaccination site in Midrand. A new daily vaccination record was set on July 21 2021
Image: Waldo Swiegers/Bloomberg

A new daily Covid-19 vaccination record of 257,492 on Wednesday was tempered by news that excess deaths continue to mount countrywide.

Even among over-60s, who have been eligible for vaccinations since May 17, excess deaths are rocketing as the Delta variant of Covid-19 drives SA's third wave of infections.

The South African Medical Research Council team that issues weekly reports on excess deaths said on Wednesday the over-60 age group experienced 7,242 excess deaths in the week from July 11 to 17.

This compares with between 1,200 and 1,500 weekly excess deaths among over-60s in the weeks leading up to the vaccination rollout, when the third wave of Covid-19 was in its early stages.

The MRC team uses historical data to estimate excess deaths, and has said it believes most of the additional mortality burden is due to Covid-19.

Since the number of deaths began to exceed the norm at the beginning of May 2020, it had risen to 203,446 by July 17. The official Covid-19 death toll at the same time was 66,676, suggesting the true toll of the virus is three times higher.

Wednesday's report said last week's looting and violence in KwaZulu-Natal and Gauteng meant excess deaths may have been undercounted.

“This exceeds the highest number experienced during the surge of wave one, but is not as high as the 15,926 experienced in [the week ending January 16] at the peak of wave two,” said the MRC team.

In Gauteng, however, excess deaths from natural causes totalled 3,590 in the week ending July 17, with little change in the past three weeks.

“This is well above the numbers experienced at the peak of their first and second waves of the pandemic (about 2,100 excess deaths)," said the MRC.

“The numbers of excess deaths dropped rapidly in Johannesburg, but this should be interpreted cautiously as it may reflect a slowdown in registration due to the unrest.”

Excess deaths from natural causes remain lower than they were at the height of the second wave of the Covid-19 outbreak in SA.
Image: SA Medical Research Council

The weekly number of deaths from unnatural causes dropped after the lockdown was tightened to adjusted level 4 on June 27, with a new ban on alcohol sales and the imposition of a 9pm-4am curfew.

“However, coinciding with the unrest in KwaZulu-Natal and Gauteng, and continued taxi violence in the Western Cape, the number of unnatural deaths increased to a level slightly lower than the predicted number [in the week ending July 17]," said the MRC team.

SA recorded 516 Covid-19 related deaths in the past 24 hours, the health department said on Wednesday - but emphasised that 197 of these fatalities ...
News
9 months ago

NICD says next week is key to knowing if SA has past third wave peak, as 596 new deaths are recorded