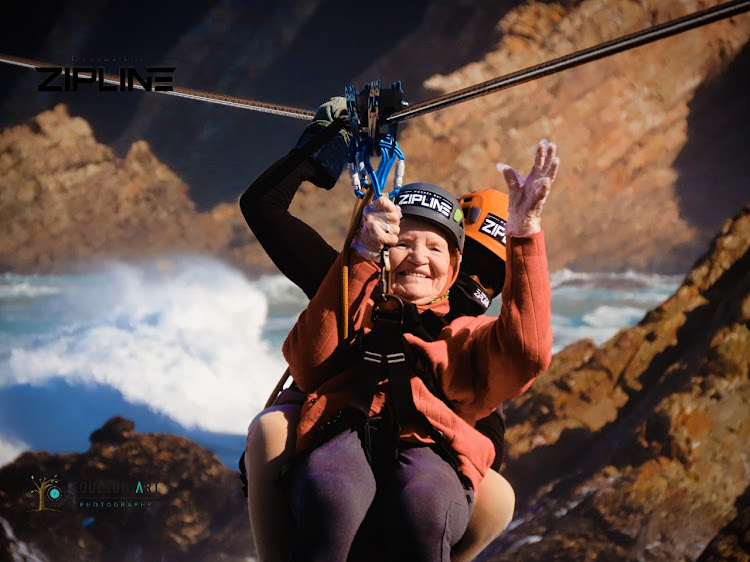 Marie Fick, 94, waves for the camera as she rockets across the bay on the world's longest over-sea zipline.
Image: Supplied

When Marie Fick saw the zipline, she told her daughter Mariaan: “I want to do it.”

The zipline, operated by Mossel Bay Zipline, runs for 1.1km over open sea in Mossel Bay, in the Western Cape, and holds the distinction of being the world’s longest zipline over water.

Mariaan tried to dissuade her mother. “I was scared myself. And I didn’t want her to have a heart attack,” she told TimesLIVE

But her 94-year-old mom was having none of it.

Despite her advanced years and creeping deafness, Marie, who lives in a cottage in a retirement village in Bloemfontein, is fiercely independent, cooking for herself and pottering in her garden.

Decades after burnishing his reputation as a wealthy daredevil mogul in a series of boating and hot-air balloon expeditions, Richard Branson is ...
News
2 weeks ago

“My dad did missionary work in Zambia and he was a Comrades Marathon runner. Their life was not easy.”

When she turned 92, Marie applied for a new driver’s licence and continues to drive, although often at high revs on account of her poor hearing.

“Her car sounds like a weed eater when she drives because of the high revs,” said Mariaan.

Due to her age, Marie was strapped into a tandem harness with one of the company’s instructors for her zipline ride and sailed off over the bay.

On reaching the other side, she was helped out of her harness before remarking to her daughter: “There’s nothing to be scared of.”

The company is building another zipline nearby, which promises an even bigger adrenaline spike for riders.

Marie has informed her daughter she intends to ride it.