Elections should be postponed to 2022 or they will be flawed, says Moseneke

‘All predictions show infections, hospitalisations and mortality will remain a significant threat to the fiscal wellbeing and life until a substantial number of our population has been vaccinated’ 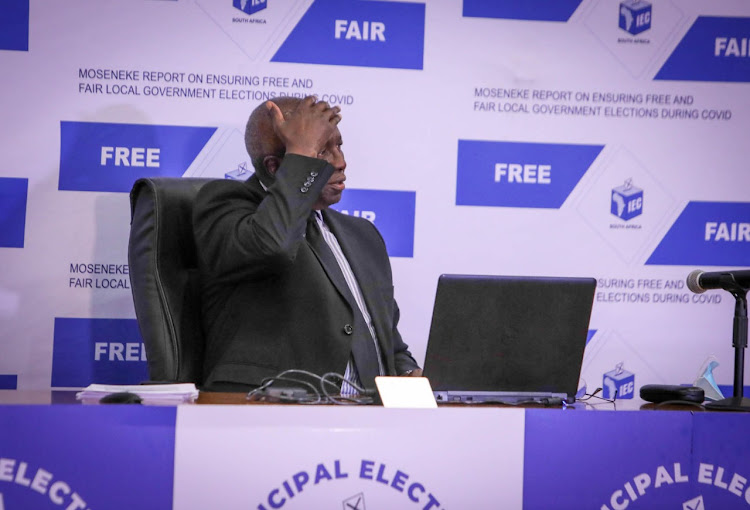 As a result, they must be postponed to February next year.

Handing over his final report on Tuesday on the feasibility of conducting the elections, Moseneke said his inquiry had considered extremely opposing views from stakeholders including health experts, civil society, political parties, business and labour organisations.

He said the commission had been tasked with a heavy responsibility and faced a conundrum between balancing the right to life and the democratic right to vote.

It is not reasonably possible or likely the elections scheduled for the month of October will be held in a free and fair manner.

“Having considered all submissions and the related science, we conclude it is not reasonably possible or likely the elections scheduled for the month of October 2021 will be held in a free and fair manner, as required by the provisions of the  constitution and related legislations. We go further to find the scheduled elections are likely to be free and fair not later than the end of February 2022,” he said.

Moseneke said although his report was not binding, most of the acts required to be performed in accordance with election preparation, including a draft timetable, will not be possible, starting with face-to-face registration of voters who do not have access to electronic registration.

Another reason was that the Electoral Commission (IEC) had approached the electoral court on eight occasions to seek orders postponing the holding of elections due to unfavourable conditions. All were granted.

Moseneke also considered the impact of forging ahead with elections would have on smaller political parties.

“What is also important is that political parties and independent candidates must be able to participate in the elections fully and effectively. This means they must be able to get their political message to their chosen electorate.

“Larger, well resourced political parties will more easily be able to advertise widely and shift to digital platforms to engage with their voters.”

On the evidence presented by health experts, Moseneke said: “All experts' predictions through October are that infections, hospitalisations and mortality will remain a significant threat to the fiscal wellbeing and life until a substantial number of our population has been vaccinated.”

ANC acting secretary-general Jessie Duarte had submitted that elections should go ahead with strict adherence to Covid-19 protocols.

The DA’s Werner Horn had argued that the elections must forge ahead in October “come hell or high water”.

The EFF through its leader Julius Malema had proposed that elections be postponed to May 22.

The IFP said it was ready for elections but would accept any outcome.

The PAC outright rejected the possibility of elections going ahead.

Al Jama-ah president Ganief Hendricks told the inquiry elections must go ahead in October even though they could possibly be unfair.