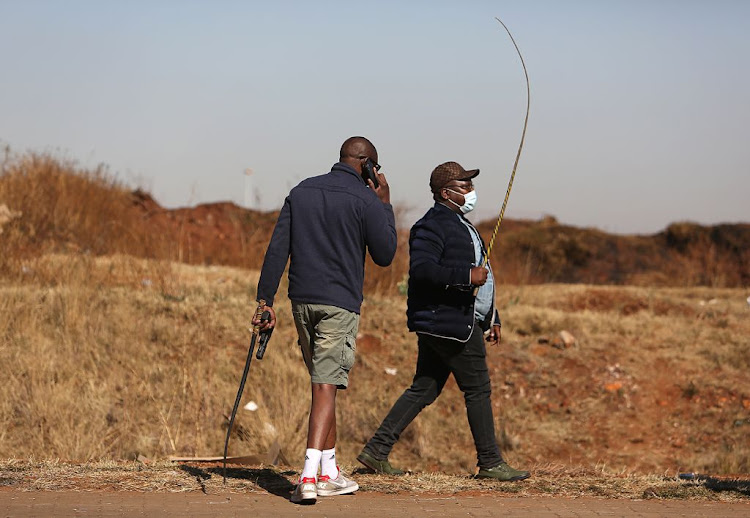 The Progressive Youth Alliance is calling on businesses, individuals and leaders to donate sjamboks to "help us defend our schools". In view: The Katlehong People's Taxi Association took matters into their own hands to protect the malls in Vosloorus last week.
Image: Alon Skuy/Sunday Times

A call has been made for youth to be equipped with sjamboks to tackle school vandals.

The Progressive Youth Alliance has called on businesses, individuals and leaders to donate sjamboks to “help us defend our schools”.

ANC Youth League Johannesburg regional task team member Penuel Maduna said the alliance was making a special call directly to “young people, who should be the vanguards of our societies, to sjambok anyone who intends to damage our school infrastructure and as the Progressive Youth Alliance we will be in a process of distributing sjamboks to young people”.

“We as the Progressive Youth Alliance in Greater Palestine Central have recently noted intended actions and threats by some rascals to vandalise and/or burn schools. This has been seen in KwaZulu-Natal as there are reports that more than 50 schools have been damaged.

“We condemn this action with the contempt it deserves and call on everyone who wishes to express their dissatisfaction with the government, judiciary or any institution to do so without damaging infrastructure that is meant to free us from the chains of the triple challenges which are poverty, unemployment and inequality.

“We call on all law-abiding citizens of the country to stand together and ensure that schools are protected from criminal elements which seek to further delay learning and teaching particularly at a time where the Covid-19 pandemic has strained the learning patterns of young people of this country,” he said.

He said the alliance would be launching a 100 sjamboks per ward and “1 young person, 1 sjambok” campaign soon.

“We will in the next coming days start with the distribution and utilisation of the sjamboks. We also wish to make it very clear that should it come to a push, a more harsher action will be taken against those who think schools are a playground.

“We also call on the government to station police vans in every school and soldiers in every area... We also call on the president and his cabinet to visit the affected schools and give us a clear programme of action on how and when the schools will be fixed,” said Maduna.

The department of basic education rejected the use of violence as a means to resolve problems.

“The department is aware of a media statement calling for the use of violence as a way of protecting schools from vandalism. While we agree and support the need to protect schools against vandalism, we also urge those doing so to keep within the limits of the law,” said department spokesperson Elijah Mhlanga.

The department of education in KwaZulu-Natal said 130 schools had been vandalised and looted during the unrest.

“The damage caused will certainly have a huge impact on schools which are opening for the third term on Monday July 26. The most affected districts are Umlazi, Pinetown and Ugu,” said Mhlanga.

More than 50 schools have been damaged, torched and looted during the unrest that has gripped KwaZulu-Natal.
News
10 months ago

The National Professional Teachers' Organisation (Naptosa) has expressed concerns about 32 schools that have been vandalised and looted in ...
News
10 months ago

While looters ran through the streets of Johannesburg, grandmother Evelyne turned off her lights, stood by her window and carefully lifted her ...
News
10 months ago
Next Article