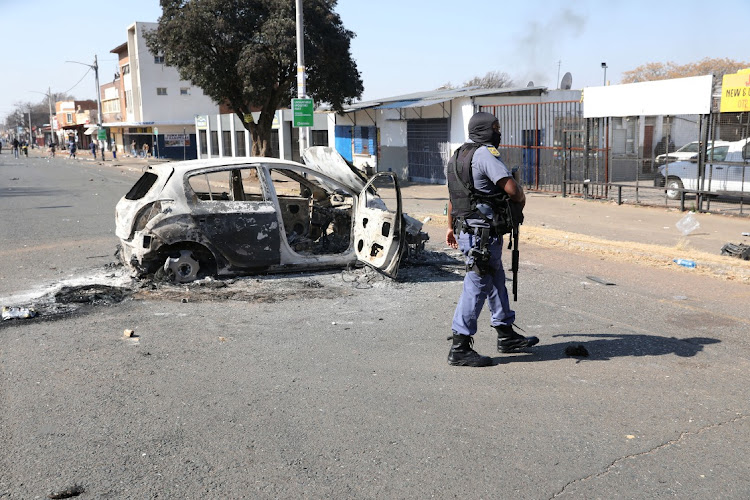 A burnt car in Jules Street, Malvern, after violent protests and looting swept through parts of Johannesburg and Durban.
Image: Veli Nhlapo

The SAPS has spent R350m in the last few days in a bid to curtail violent looting and protests.

This was revealed by Maj-Gen Leon Rabie in a report to the portfolio committee for police in parliament on Friday.

KwaZulu-Natal and Gauteng have been engulfed by violent protests and looting which started out as a call for the release of former president Jacob Zuma.

Zuma was taken into custody last week on Wednesday night after being sentenced to 15 months in prison for failure to adhere to a Constitutional Court ruling directing him to appear at the Zondo commission to answer allegations of state capture.

“The estimates on expenditure as far as these deployments are concerned, it's provisionally estimated at approximately R350m, the expenditure that in turn has resulted in the deployment.

“What is contributing to the expenditure mentioned is, in terms of the direct costs, the all inclusive overtime allowance, night shift and service allowance, the remuneration of the reservists, meal allowance,” said Rabie.

Business Unity South Africa on Thursday called on government to institute a 24-hour curfew in KwaZulu-Natal and Gauteng areas which have been ravaged ...
News
11 months ago

He said this also included the cost of accommodation, resources that needed to be procured and indirect costs related to fuel, water cannons, ammunition and barbed wire.

“The funding mechanisms that have been identified to fund the current estimates will be done through the prioritisation of the current allocations within the SAPS allocations,” said Rabie.

He said the department will have to shift its resources and would ask the National Treasury for approval.

Rabie told the committee that police had registered 1,212 cases related to the violence and looting, more than 900 of which were in KwaZulu-Natal.

Violent protests and looting have hit the country hard, leading to food supply shortages in KZN and fears of bread and petrol shortages that could affect Gauteng and other provinces. A number of shopping malls and shops were set alight during the rampage, while delivery trucks in KZN, mainly on the N3, were set alight.

The police told the committee that members would now escort trucks for protection.

There is a health risk in addition to the economic losses, the SA Pharmacy Council warns.
News
11 months ago

Protests and looting which saw store shelves stripped bare in Gauteng have been the worst encountered by law enforcement, a private security firm ...
News
11 months ago

Two police reservists in Soweto are among hundreds of people arrested during the looting that affected mostly shopping malls in KwaZulu-Natal and ...
News
11 months ago
Next Article