Community pitches in to clean up Umlazi mall hit by looting 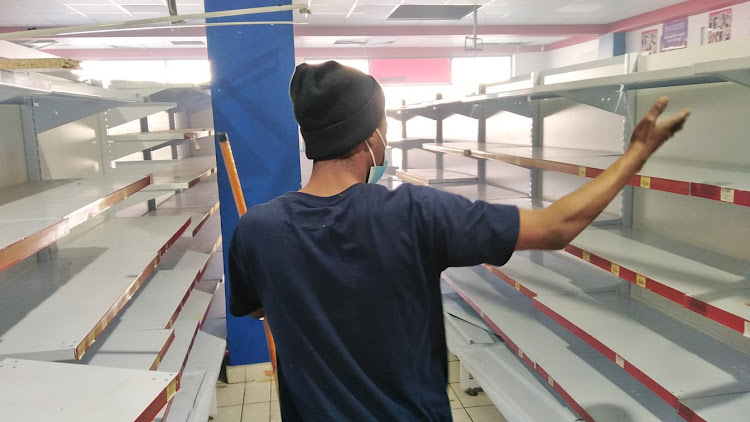 Siboniso Dlamini from Beauty World inside his store which was looted in Umlazi
Image: Supplied

Scores of Umlazi residents volunteered to clean up malls and businesses after damage caused by the unrest and protests in KwaZulu-Natal.

Mthandeni Mashaba, a local teacher in Umlazi told TimesLIVE on Friday that he decided to take part in assisting local businesses to clean up their stores in preparation to reopen.

The 43-year-old said he decided to celebrate his daughter's 12 birthday by gathering some friends and neighbours to help clean up the Umlazi Plaza, which had been damaged during looting earlier in the week.

“As I am here, I am representing teachers, parents and concerned members of the community. Our brothers here are merely volunteers and none of us are getting paid.

“it's my daughter's birthday. She is turning 12. Since schools are closed and so are many shops, I decided to gather some of my neighbours to join me in lending a hand to the business owners of Umlazi in recovering from the damage in their stores.

“There has been a lot of damage and pain inflicted on the community, and as men we have to stand up and rebuild our shops,” said Mashaba.

Thabani Dube, 23, a young businessman who runs a pizzeria in Umlazi, also joined the team of volunteers.

He said his decision to help local businesses rebuild their shops was based on the fact that he learns a lot from them.

“We are here at the plaza to try and assist all the shops that were affected by the looting including the post office.

“We just want to make their recovery easier where possible. This has also particularly affected us negatively as upcoming business owners in the township. We believe we have a responsibility to help these young businesses because we learn a lot from them as young entrepreneurs,” he said.

Owen Asaram, the caretaker and hardware store manager at Umlazi Plaza said the looters cleared out his shop during the raid.

Asaram said he'd been working tirelessly since the morning, with two of his employees, to prepare to reopen the store again.

“We first came here yesterday [Thursday] to try and put everything in order. They have looted everything inside the shop. The Chinese outlets were torched and burnt to the ground. They were targeting mostly Indian-owned shops.

#Durban communities are volunteering to clean up shopping centres in their neighborhoods.

In Mlazi, Mthandeni Mashaba decided to gather his friends from V section and help clean the Umlazi Plaza.#kznburns#looting@TimesLIVE pic.twitter.com/rGUarmTs2s

Every shop in the plaza was looted except the butchery, which is run by a local resident,” said Asaram.

Beauty World cosmetics shop in Umlazi V section was not spared from the looting. The shop is located opposite the plaza.

Sboniso Dlamini, the manager, said he begged the mob not to loot the store, but his cries fell on deaf ears.

“We were particularly affected when the looters started attacking businesses in this centre. When I was notified that they were breaking into the store, I quickly rushed from my home to try and stop them but I couldn't get here in time as the taxis were also very scarce. When I eventually arrived and tried to speak to them, it was too late.

“Our security officers began to run and hide for their safety because they were being threatened.

“We would be grateful for any assistance we can get in cleaning and  rebuilding our shop. This shop is very important to the community — we provide them with essential products such as baby food, as well as washing and cleaning detergents,” said Dlamini.

The SAPS has spent R350m in the last few days in a bid to curtail violent looting and protests, parliament heard on Friday.
News
6 months ago