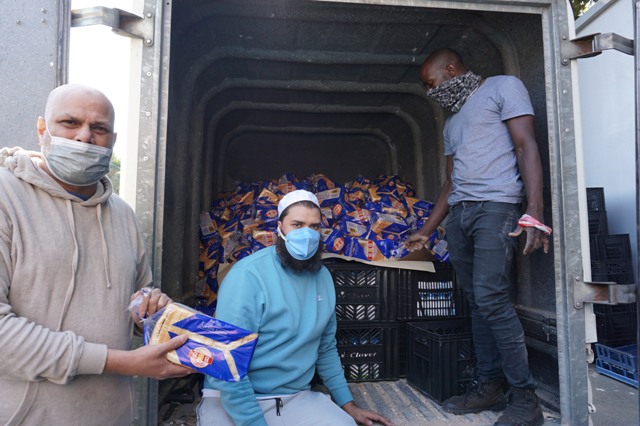 On Thursday Muslims for Humanity, in collaboration with various NGOs and charitable organisations in Durban, distributed 40,000 loaves of fresh bread and 40,000 litres of milk to hungry people as a result of damaged infrastructure and looted shops in the greater Durban area. The operation was funded by businesses and charitable organisations in Gauteng and KwaZulu-Natal.
Image: supplied

As residents scrambled for food supplies due to unrest in Durban, at least 20 businesses and non-government organisations and non-profit organisations, including Muslims for Humanity and the Natal Memon Jamaat Foundation (NMJ), distributed 40,000 loaves of bread and 40,000 litres to communities.

Muslims for Humanity chairperson Mohamed Gany said the plan to bring food supplies to Durban from Gauteng began on Tuesday.

By then numerous warehouses, factories and shops had been looted and torched throughout KwaZulu-Natal.

Gany said to avoid crowded distribution points, various community organisations and individual businesses in Durban had pooled resources to take the bread and milk into different communities from a central point in the city on Thursday.

SANZAP marketing co-ordinator Mohamed Riaz Fakie, who manned one of the distribution points on Thursday morning, said the organisations had been inundated with calls offering help from Gauteng.

“A last-minute decision had been taken to work together to load the much-needed foodstuffs on trucks headed for Durban.”

One of the Gentleman and operation behind the 32,000 loaves of bread being distributed at the NMC Islamic Centre in Morningside, Durban. You are truly a blessing to the country! THANK YOU!!! 🙏🏽🙏🏽🙏🏽 🤲🏽🤲🏽🤲🏽

Fakie said businesses and community organisations in Gauteng had funded both the food and the private security contingent that had been needed to get the milk and bread to Durban from Gauteng safely.

These gentlemen drove from Azaadville in Jhb to Durban with their own trucks & security, carrying 32,000 loaves of bread for distribution!!! May you forever be blessed! 🤲🏽 🙏🏽

Fakie said that it was hoped that the dire food shortages that were gripping the city in the wake of the destruction of retail outlets, factories and warehouses, could be resolved as soon as supply chains could be restored.

Looters have invaded some farms, stolen livestock and equipment, destroyed infrastructure and endangered the lives of employees.
News
1 year ago

Domestic airline Safair said on Thursday it would be sending bread and other essential food to KwaZulu-Natal while laying on extra flights to cater ...
News
1 year ago

Grocery shop managers and petrol station owners in some parts of Gauteng said yesterday that panic buying had caught them off guard amid concerns of ...
News
1 year ago

Residents in parts of Soweto and Kagiso on the West Rand have reported there is no bread at shops still able to trade.
News
1 year ago
Next Article