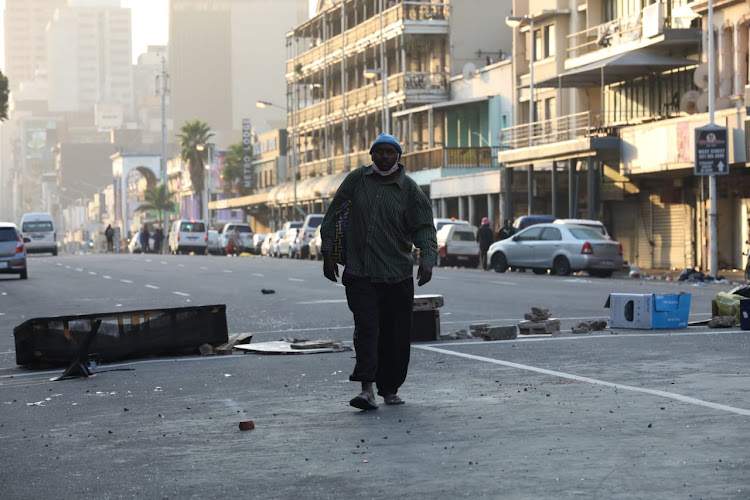 The Durban CBD after a long day of looting.
Image: Sandile Ndlovu

A critical medicines shortage in KwaZulu-Natal is inevitable, given that scores of pharmacies have been looted and a pharmaceutical manufacturing plant in the province has been destroyed, along with two massive distribution warehouses.

That’s according to Jackie Maimin, CEO of the Independent Community Pharmacists Association. Independent pharmacies make up more than half the pharmacies in KZN.

“We will have to get medicines from other provinces, but the challenge is securing security escorts for those trucks,” she said.

“The drivers are extremely worried that they will be targeted but armed escorts are very hard to come by.

“We’ve been told that the SANDF is over-stretched.”

With all Clicks and Dis-Chem pharmacies remaining closed in KZN, those pharmacies which have been able to open, if only for a few hours a day, are helping each other out with medicine stock, Maimin said.

“We are working off a map of hot spotsto avoid having pharmacies open in the most volatile areas.”

SA is experiencing what President Cyril Ramaphosa describes as the worst violence we have seen in our democracy, as parts of Gauteng and KZN have been looted and burnt.

In many cases, there is only one pharmacist on duty, when usually there are three or four, with a very long queue of people outside.

“One pharmacist was told by police to close up and get home while he still could, but he refused as there were still 20 people who needed medicine.

“He ended up having a very scary drive home.”

In many communities, residents have come out at night, standing with pharmacists to protect pharmacies from looters. “Small corner pharmacies are not a priority for security forces, who are primarily focused on saving lives, but when it comes to life-saving medication, it actually is about saving lives,” Maimin said.

Looters have stolen fridges full on insulin which diabetics need to survive, along with ARVs for HIV-positive people, cancer drugs, tuberculosis medication and more. “So there will be a shortage of those drugs, especially given that the Cipla plant, a major manufacturer of generic drugs, has been looted, along with two huge distribution warehouses, VPD and Pharmed.”

“We will be able to retrieve some of that information from the Cloud, but it won’t be possible in many cases, so thousands of people will have to go back to their doctors to get new prescriptions for their chronic medication.”

A 13-year-old boy was shot and killed as members of the Katlehong People's Taxi Association have taken it upon themselves to protect malls around their communities.

The SA Pharmacy Council said on Wednesday it was distraught at the looting of pharmacies, destruction of healthcare services and livelihoods.

“Among the looted items are Covid-19 vaccines and scheduled medicines, which when used without proper pharmacist counselling on storage and dosage may result in harm to one’s health,” said CEO Vincent Tlala. “We are also worried by the loss of pharmaceutical care that the affected areas will experience as a result of the temporary and, in most cases, prolonged closures of pharmacies as most of the pharmacies that are affected are independently owned.”

Minister of basic education Angie Motshekga said more than 500,000 educators and staff had been vaccinated out of the 582,000 that were meant to ...
News
10 months ago

Riots hit Covid-19 testing, as just 380 cases are recorded in KZN in 24 hours

There were just 387 new Covid-19 cases recorded in KwaZulu-Natal in the past 24 hours, as the consequences of the ongoing looting and violence ...
News
10 months ago

40 independent pharmacies in KZN and Gauteng looted and damaged

About 40 pharmacies in KwaZulu-Natal and Gauteng have been looted in ongoing riots in the two provinces, says the Independent Community Pharmacy ...
News
10 months ago
Next Article