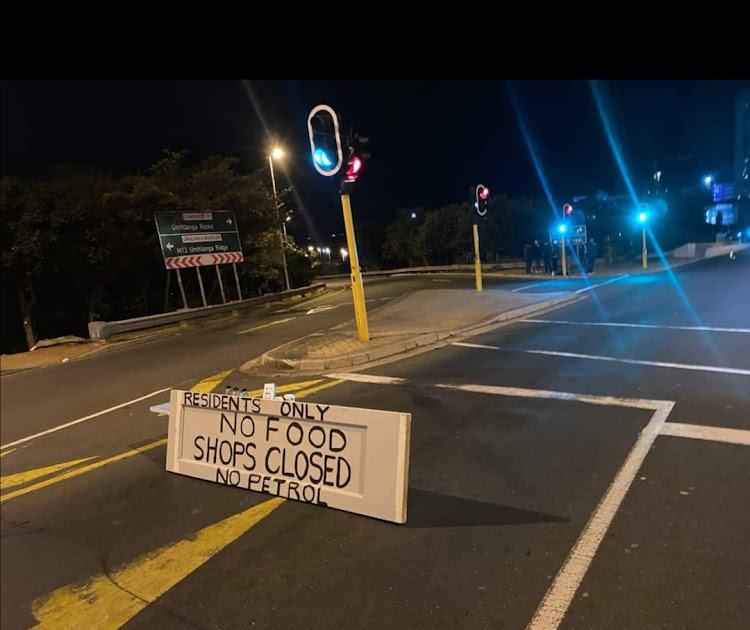 Some Durban suburbs have set up checkpoints to only allow in residents, to protect communities from unrest.
Image: via Facebook

Legal experts say community checkpoints — set up by Durban residents to protect communities against unrest and looting — are illegal and contrary to the constitution.

Debate is raging on social media platforms about whether community checkpoints that have been set up in various Durban suburbs have fuelled racial tension and advocated racial profiling.

In some areas only residents are allowed access and can shop at stores that are open.

Many are venturing into other suburbs in search of food supplies and other essentials which are scarce in the region.

This comes in the wake of the continuous looting, destruction of property and violence in the name of the #FreeJacobZuma campaign.

One Facebook user said in a community group: “Every area needs to accommodate their residents first. This is the only way order and safety will prevail.”

Another Facebook user lambasted a Durban south suburb that is not allowing residents from other areas in.

“It's a crime in my eyes! It's absolutely disgusting!”

One suburb north of the city said in a post about supermarkets open for limited trade that the area would be controlled by checkpoints.

“You will have to provide ID and proof of address.”

On Wednesday, eThekwini mayor Mxolisi Kaunda, during a meeting with community leaders of Phoenix, KwaMashu, Ntuzuma and surrounds to quell simmering racial tension between communities, said only the police were empowered to set up roadblocks.

He said inciteful WhatsApp messages calling for attacks on Indian and white communities had fuelled fear and prompted them to put “initiatives in place” to protect themselves.

“They mobilised themselves with security companies and community members. Even myself as the mayor I have been stopped in this city.

“I had to explain myself ... that I am just an ordinary citizen going to that house ... But does that responsibility lie with community members and the safety community structures or with the police to conduct roadblocks?

“The answer to that is it is only the police who are allowed to conduct roadblocks in SA , it can't be us as community members.

“But why they are doing this is because there is fear. They have heard these messages and they think that police are not seen around, so therefore we must mobilise ourselves and defend our property and lives.

“But in doing that some of them have committed crime. The right of association is provided in the constitution.

“What becomes wrong is when we start putting a race card in that. Therefore when an African comes he is the one who must be scrutinised, when another racial group comes, no, you can pass. When you have a fear you suspect everything that comes before your eyes.”

Advocate Paul Jorgensen said community checkpoints, and demands for proof of residence were completely illegal and contrary to the constitution.

“A community has no legal standing to impose these restrictions.

“While I understand, given the present circumstances, where they are coming from, it infringes on almost every right in the constitution.

“They are going too far.”

He said only law enforcement agencies had a legal right to set up checkpoints.

“Quite frankly, if I need food or petrol, I can go wherever I want to get it.”

He said it could create conflict between neighbouring communities, with people laying claim to “their shopping centres” and “their hospitals”.

“There is no perfect solution, but some, such as this, are less perfect than others.”

He said it could also result in continued hardship for law-abiding citizens in townships who also needed to stock up on basics but would be prevented from doing so.

“It’s a recipe for disaster.”

Lawson Naidoo, executive director of the Council for the Advancement of the South African Constitution, agreed that community checkpoints were unlawful, in that they infringed on the constitutional right to freedom of movement.

Grocery shop managers and petrol station owners in some parts of Gauteng said yesterday that panic buying had caught them off guard amid concerns of ...
News
10 months ago

Hundreds of people armed with shovels, plastics and brooms flocked to different malls that were looted when riots over the jailing of former ...
News
10 months ago

'It's economic sabotage,' says Ntshavheni of riots and looting

Ntshavheni revealed that those behind the sabotage had been identified and criminal proceedings instituted against them.
News
10 months ago
Next Article