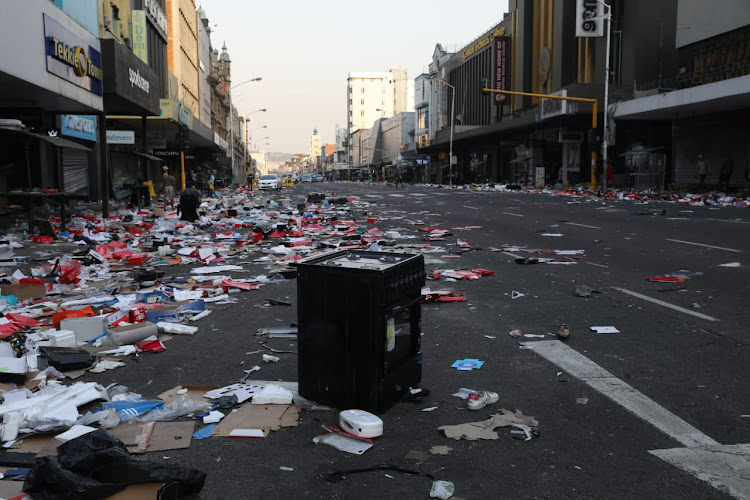 The Durban CBD after a long day of looting.
Image: Sandile Ndlovu

The ANC Veterans League (ANCVL) has added its voice to those denouncing the looting of goods and public violence sparked by the arrest of former president Jacob Zuma, saying this was unprecedented since the advent of democracy in 1994.

This as big corporates have halted production and transportation of essential goods leading to a scarcity of fuel and food after shops and factories were looted and burnt down in the “free Zuma” riots which started last week. The Covid-19 vaccination rollout has also been affected as various sites had to shut down.

“This unwarranted and wanton violence affects every member of society. The sick are not able to visit the hospitals, Covid-19 vaccines had to be suspended in some areas as it was gaining momentum, health workers cannot get to work and food supplies have been affected,” said Zikalala.

“This public violence and mass looting has not been seen since the advent of our constitutional democracy. This was provoked by individuals calling for resistance to the decision of the Constitutional Court in the contempt hearing of the former president and has been joined by criminals and thugs.”

Zikalala commended the deployment of the army to the hotspots in KwaZulu-Natal and Gauteng.

The minister of defence, Nosiviwe Mapisa-Nqakula, on Wednesday announced that they will be deploying an additional 25,000 soldiers.

“As the ANCVL we welcome the deployment of the army in the hotspots areas to reinforce the SA Police Service,” Zikalala said.

He said the protests were led by what he called counter-revolutionaries who were attempting to derail the party from its renewal projects.

“Those who have instigated and participated in the creation of the prevailing chaos and mayhem must be held accountable for their misdeeds,” said Zikalala.

He called on South Africans to unite in protecting their country and its economy, and also commended the unaffected provinces for successfully preventing looting.

Malema snubs Ramaphosa's meeting on riots and looting, says ANC must solve its own problems

'I don't participate in rubbish,' says Julius Malema as he snubs Ramaphosa meeting on violence and looting.
News
11 months ago

ANC chair Gwede Mantashe said it will take a long time to rebuild the economic infrastructure that has been destroyed, and that the working class and ...
News
11 months ago
Next Article