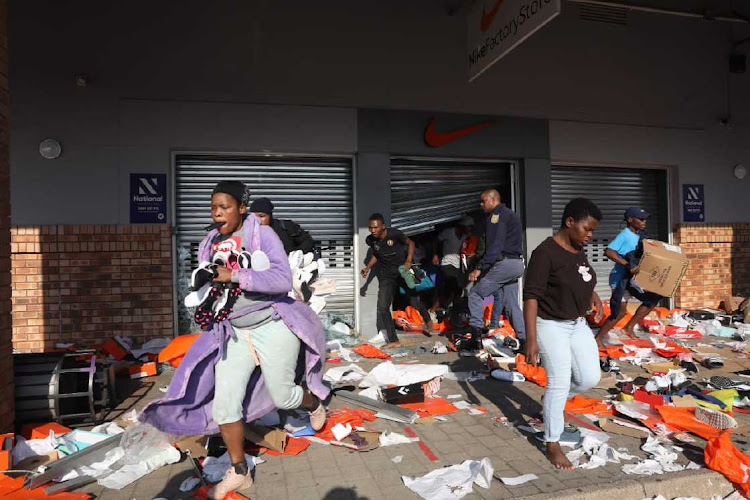 Durban is on fire as looters burn and plunder shops.
Image: SANDILE NDLOVU

As messages threatening huge pro-Zuma protests in the Eastern Cape this week circulated widely on social media on Monday, National Joint Operational and Intelligence Structure (NatJoints) ​spokesperson Col Brenda Muridili issued a warning to those behind the calls.

The messages claimed there would be “huge” protests in Gqeberha, Bhisho, East London and Mthatha on Tuesday.

Reportedly there were protests in the Nelson Mandela Bay metro and Makhanda on Monday morning. But the messages shared on social media implied that there would be a total shutdown on Tuesday.

​“A warning is issued to those circulating inflammatory messages, inciting violence and lawlessness, that they refrain from doing so,” Muridili said.

“The possibility of criminal charges being instituted against such people cannot be ruled out, particularly in the event of injury or death that may come as a result of any operational response by the security forces to these incidents of violence and opportunistic criminality.”

Transport, safety & liaison MEC Weziwe Tikana-Gxothiwe urged the people of the Eastern Cape “to resist any temptation and any amount of lobbying to jump on to the bandwagon of huge infrastructure vandalism, businesses destruction and looting that is playing out in some parts of the country”.

“The aftermath of such actions will be too much to bear and even harder to recover from for an already economically hamstrung province like the Eastern Cape,” she warned.

​The violent protests in KwaZulu-Natal and Gauteng had led to the deployment of the military, authorities announced on Monday. ​

The problem is you can’t shoot them, cop says about looter stealing goods

There were chaotic scenes at the Springfield Value Centre in Durban on Monday as scores of people from surrounding communities stormed the shopping ...
News
1 year ago

Pietermaritzburg turned into a war zone as violent protests and looting in the name of a campaign to release former president Jacob Zuma from prison ...
News
1 year ago
Next Article