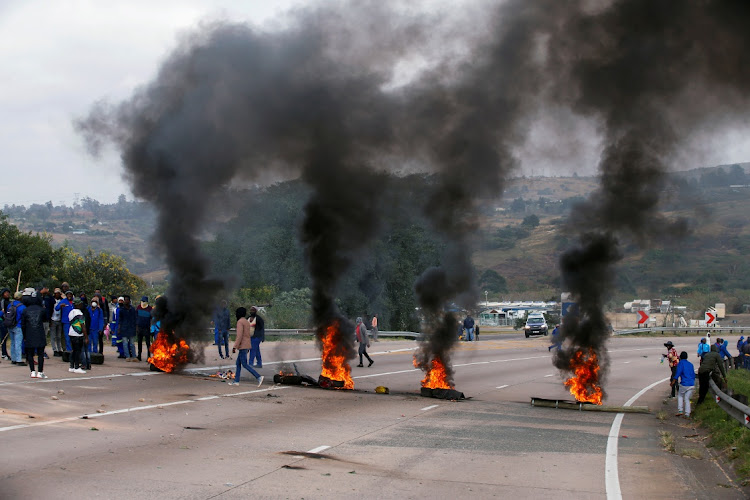 A 40-year-old man has been killed and a police officer was rushed to hospital after they were shot in Alexandra, Johannesburg, as violent protests over the jailing of former president Jacob Zuma flared up in Gauteng on Sunday.

The National Joint Operational and Intelligence Structure (NatJOINTS) said in a statement on Sunday that it was investigating the killing, adding that they could not at this stage say whether the man was shot at a protest or not.

"In the meantime, an investigation is under way to determine the circumstances surrounding the fatal shooting of a 40-year-old man who was certified dead at a local clinic," NatJOINTS spokesperson Col Brenda Muridili.

The sporadic protests, which started in KwaZulu-Natal last week with Zuma's supporters calling for his immediate release, have now spread to Johannesburg.

Police said they were on high alert in both provinces "in response to incidents of opportunistic criminality and violent protests".

Large crowds, describing themselves as Zuma supporters, blockaded freeways such as the N3 and N2 and torched 28 trucks on Friday.

In the Jeppe policing precinct, in Johannesburg, police dispersed a group of about 300 people who had barricaded the M2 freeway, Muridili said. There was destruction of property and looting.

"It is alleged that one group then headed to the Jeppestown where they looted a number of businesses. Seven suspects were arrested, four of whom were found inside one of the stores, while three were arrested for public violence and for being in possession of suspected stolen property.

The ANC has called on party leaders in KwaZulu-Natal and national executive committee  deployees to stem violence during protests over the ...
News
11 months ago

"In Alexandra, police arrested 18 suspects – 16 of them for public violence, also linked to the shooting of a police officer who was rushed to hospital for urgent medical attention. Two other police officers sustained minor injuries.

"The other two suspects were arrested for possession of suspected stolen property and malicious damage to property. This came as police responded to information of a group of people from Alexandra who targeted and forced entry into businesses, and started looting," Muridili said.

She said the group of about 800 people is reported to have attacked police.

"[This] resulting in the shooting of police officers who have now received medical attention, with only one in hospital in a stable condition," Muridili said.

She said in KZN, where incidents of violent protests started on Friday, the number of arrests has increased to 37 thus far.

"Police, working closely with metro police, have overnight been able to disperse crowds and foil attempts to barricade roads. No further looting has been reported. NatJOINTS is working around the clock to enhance operational capacity at provincial level in response to incidents in which people appear to be undermining the authority of the state, including the flouting of the DMA [Disaster Management Act] regulations.

"A warning is issued to those circulating inflammatory messages, inciting violence and lawlessness that they refrain from doing so. The possibility of criminal charges being instituted against such persons cannot be ruled out, particularly in the event of injury or death that may come as a result of any operational response by the security forces to these incidents of violence and opportunistic criminality," Muridili said.

The KwaZulu-Natal government pleaded for calm on Friday amid protests believed to be part of a violent “Free Jacob Zuma and shut down KZN” campaign.
News
11 months ago
Next Article