No jabs for KZN cops as vaccines don't arrive 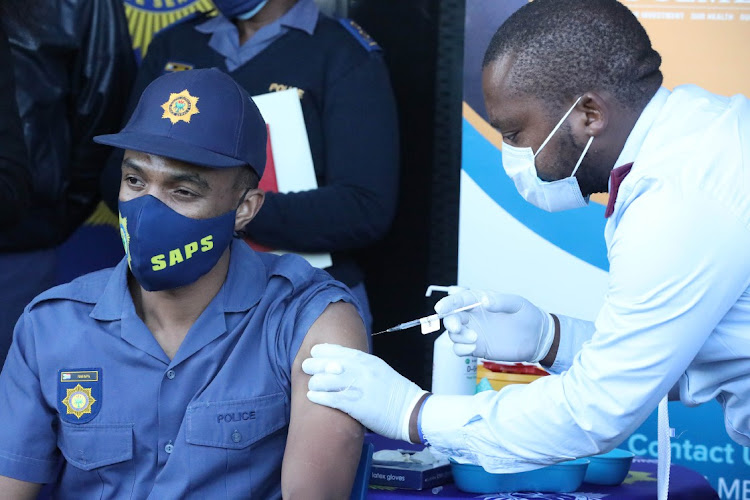 Tebogo Rafapa, 30, of Diepsloot police station gating his jab during the launch of vaccination roll out programme in Orlando Stadium, Soweto. Some members didn't receive their jabs in Durban on Thursday as scheduled.
Image: Antonio Muchave

Dozens of KwaZulu-Natal police were turned away at a vaccination site in Durban on Thursday and didn’t receive their jabs as per the planned rollout to SAPS members nationwide.

It emerged that vaccines didn't arrive at the vaccination site.

KZN police spokesperson Brig Jay Naicker confirmed this to TimesLIVE, adding that a new date for the rollout in KZN would be confirmed soon.

“The vaccines have not arrived in Durban and we have been told that the rollout will be postponed until further notice. That is all we know at the moment,” said Naicker.

On Monday, national police minister Bheki Cele led the SAPS as they launched their Covid-19 vaccination drive at the Orlando Stadium in Soweto. Cele was joined by the national commissioner Gen Khehla Sitole and scores of men and women in blue to get their jabs.

With the drive kicking off today, the police had planned to vaccinate more than 180,000 members at 108 sites across the country.

At the police officers' club in Durban Central, however, men and women in blue were told that their vaccines had not arrived.

One officer, who asked not to be named, told TimesLIVE there was shock when they were informed that KZN hadn’t received the vaccines and seemed to be the only province in the country experiencing this delay.

“This has caused a bit of a panic among some members. We were just told that there is no vaccine. Now officers are scrambling and are registering on the Dis-Chem and other websites for the vaccine.

“They did not give any reason — they just told us there is no vaccine. They said to come back tomorrow or when we get notifications on our phones.”

It is understood that a major-general advised senior managers about the delay and that a new date would be communicated.

“All systems were ready for the rollout but due to circumstances beyond the control of the district commissioner, the rollout had to regrettably be postponed due to the non-arrival of the vaccine. The vaccine is expected soon,” he said.

More than 2,000 police officers have been vaccinated through the vaccination programme, the ministry said on Wednesday.
News
3 months ago

‘We don’t know what we bring home to our families’: Cops’ relief at vaccine rollout

With police officers risking their lives when enforcing law and order on the frontline during the pandemic‚ they believe they now have a booster shot ...
News
3 months ago

Police minister Bheki Cele's office said in a statement that the plan was to vaccinate more than 180,000 officers.
News
3 months ago
Next Article