Do Zuma’s objections have any validity? 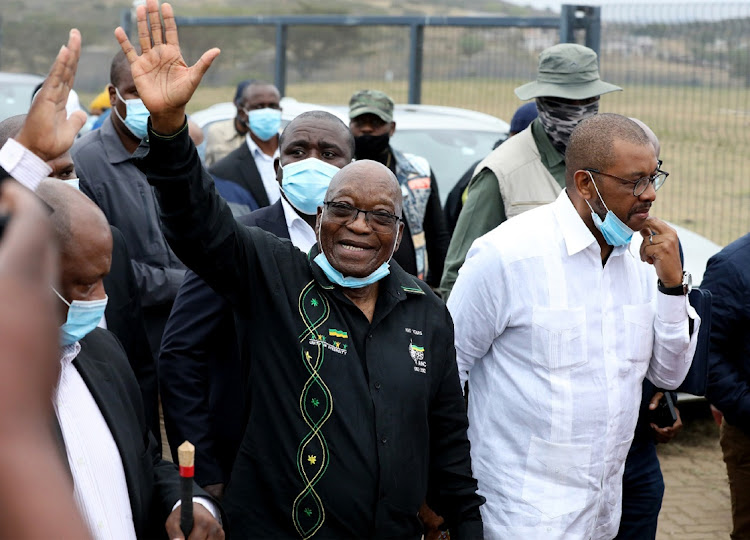 Former president Jacob Zuma addresses his supporters in Nkandla, KwaZulu Natal. The former president said he will not hand himself over after he was sentenced to 15 months in jail for contempt of court.
Image: Sandile Ndlovu

FULL ADDRESS | Zuma speaks in Nkandla after meeting with lawyers

When addressing his supporters in Nkandla at the weekend, former president Jacob Zuma made several claims which are at odds with the facts. These are some of them:

Claim: Zuma said he did not know what he had done wrong to be sentenced to jail.

Fact: Zuma was found guilty of contempt of court by the Constitutional Court for defying its earlier order for him to appear at the Zondo Commission investigating allegations of state capture.

Claim: Zuma said his constitutional rights had been violated by the conviction of the Constitutional Court as he was not given an opportunity to state his side of the case.

Fact: Zuma has on a number of occasions failed to submit an answering affidavit to the Constitutional Court, even when invited to do so. In April, Chief Justice Mogoeng Mogoeng asked Zuma to file an affidavit no longer than 15 pages by Wednesday, detailing what the appropriate sanction would be for him if he was to be found guilty of contempt of court. Zuma did not. Instead, he said he did not want to validate “a sham and an attempt to sanitise the gravity of the repressive manner in which the Court has dealt with my issues”.

Claim: The establishment of the state capture commission was unconstitutional.

Fact: The Commission was established by then president Zuma, in accordance with the remedial action by then public protector Thuli Madonsela. Zuma challenged Madonsela’s remedial action, arguing that as president he should have been the one to choose a judge to chair it. The high court in Gauteng ruled that Madonsela had the power to direct Zuma to appoint a commission of inquiry and to direct that Chief Justice Mogoeng Mogoeng select its chairperson, as Zuma was conflicted and personally implicated in the allegations of state capture. In October last year the Supreme Court of Appeal dismissed with costs Zuma’s application to challenge the remedial action of Madonsela.

Claim: By refusing to recuse himself, commission chair judge Zondo had abused his power and acted unduly.

Fact: The Code of Conduct states that a judge must recuse him- or herself if there is a real or reasonably perceived conflict of interest, or if there is a reasonable suspicion of bias based upon objective facts. It furthermore states that a judge shall not recuse him- or herself on insubstantial grounds. Zuma had failed to produce reasonable evidence of bias by Zondo against him. The outcome of his subsequent court challenge against Zondo is pending.

Claim: Zuma claimed that Zondo had been chosen as the chair of the commission specifically to ensure that Zuma’s rights were undermined.

Fact: Zuma has not produced evidence of Zondo’s bias. When Zuma announced Zondo as chair of the commission in 2018, he raised no concerns but urged all to co-operate with the commission and to place no impediments to prevent it from doing its work.

ConCourt will hear Jacob Zuma's urgent application to stay out of jail on Monday, July 12

The Constitutional Court will on Monday, July 12, hear former president Jacob Zuma's urgent application to rescind its order sentencing him to jail ...
News
1 year ago

Former president Jacob Zuma made his first public appearance in Nkandla on Saturday, shortly after his son, Edward, vowed there would be bloodshed to ...
News
1 year ago

During the briefing, spokesperson Carl Niehaus stated that veterans were ready to form a human shield around Zuma - willing to lay down life and limb ...
News
1 year ago
Next Article