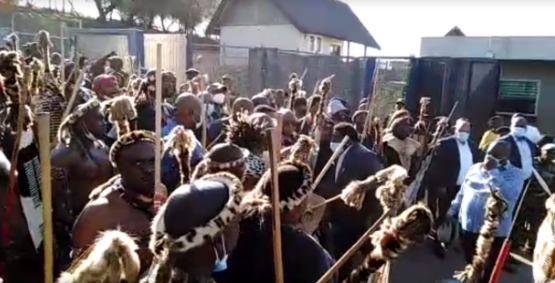 Former president Jacob Zuma made his first public appearance in Nkandla on Saturday, shortly after his son, Edward, vowed there would be bloodshed to protect his father from going to jail.

Zuma hadn't appeared in public since the Constitutional Court sentenced him to 15 months in prison for contempt of court after he refused to testify before the commission of inquiry into state capture.

Wearing a Covid-19 mask, he walked out of his house just before 3pm, shielded by Zulu warriors and surrounded by supporters. The crowd ululated as he walked around the stage from where his son had just spoken, and then went back into his house.

Just before his father's appearance, Edward spoke of a war, adding that no-one cared about the Covid-19 virus and preventive protocols in a war situation.

Zuma’s supporters “don’t give a hoot about viruses” and Covid-19 protocols, Edward said in a fiery address to hundreds of restless supporters, many dressed in ANC regalia and Zulu traditional attire, at his father’s homestead in Nkandla, KwaZulu-Natal.

“We do not care about the police. But should they dare come close to Zuma’s house, there will be bloodshed,” he said. “If they provoke us, we will give them the bloodshed that they want. Nkandla is on a total shutdown. Zuma is not going anywhere even if he elects to do so we will stop him.” 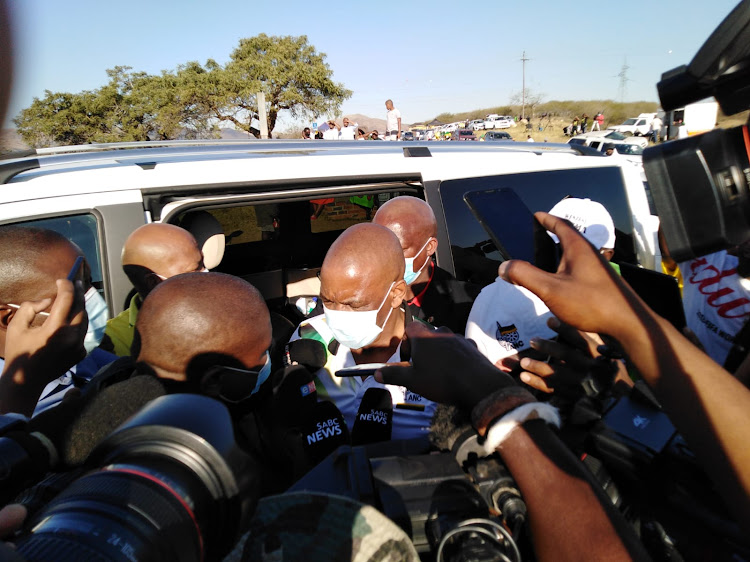 Dozens of cars in which his supporters arrived were parked in and around the homestead while some people were bussed in. Many carried placards saying, “Wenzeni uZuma?”, meaning, “What has Zuma done?”. The mood was celebratory with no police officers in sight. 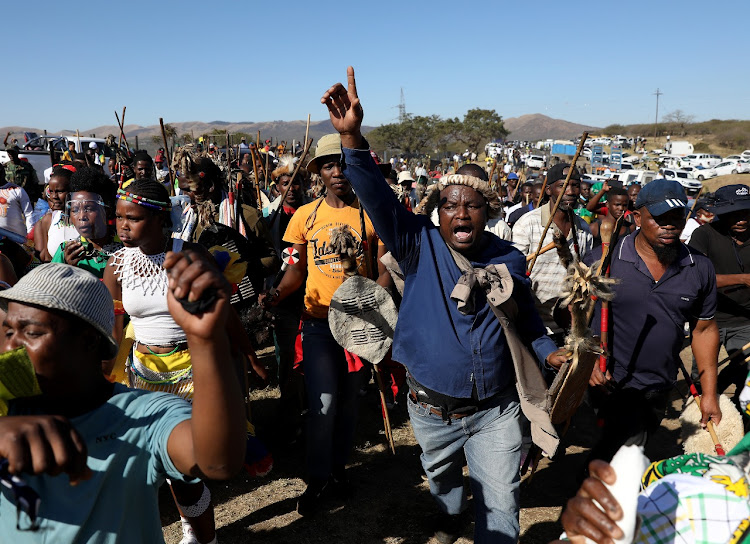 Supporters of Jacob Zuma have gathered outside Nkandla in KwaZulu-Natal.
Image: Sandile Ndlovu

KwaZulu-Natal premier Sihle Zikalala arrived at the homestead on Saturday morning and was still inside at lunchtime.

Edward Zuma took a swipe at ANC NEC leaders said to be deployed to KwaZulu-Natal to convince him to hand himself over.

“As for these so-called leaders who want to talk, we are not going to entertain them. Why have they been quiet for so long? They are a bunch of spineless people. All they care about is their own stomachs. We are not listening to anyone. And Zuma is not going anywhere. If push comes to shove and we have to take out our guns and fight, we will do so.”

Turning to the Covid-19 pandemic, Edward Zuma said: “There’s this disease that they are talking about, I don't know what it is called. But I don't care about it. We are at war here so we don't give a hoot about viruses because war is a life-threatening situation in any case.

“They must not tell us about that virus. Our priority is to protect and defend Zuma. If we die, we die.”

During the briefing, spokesperson Carl Niehaus stated that veterans were ready to form a human shield around Zuma - willing to lay down life and limb ...
News
10 months ago

The tense political situation in KwaZulu-Natal over the looming incarceration of former president Jacob Zuma has forced the ANC to postpone its ...
News
10 months ago

In a last-ditch attempt to save himself from prison, former president Jacob Zuma will be filing court papers today at the Constitutional Court.
News
10 months ago
Next Article