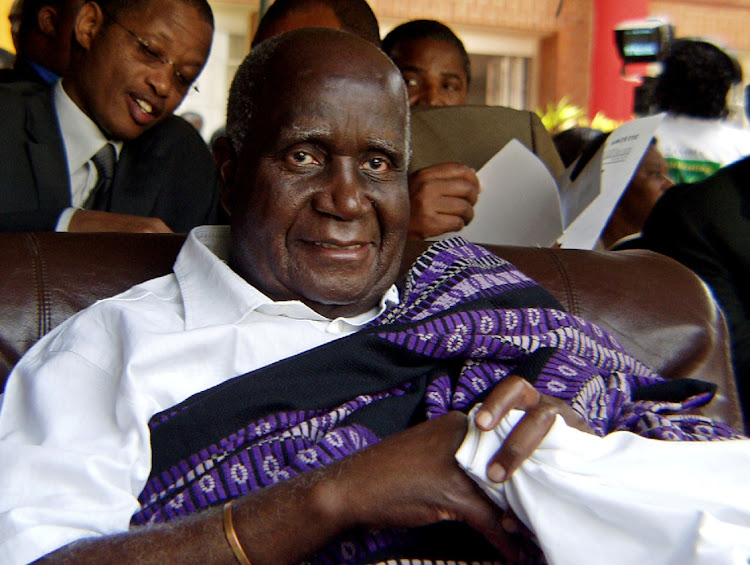 The family of the late first president of Zambia Kenneth Kaunda feels strong-armed in having to agree with the country’s government to bury the statesman at a national memorial site - something against his wishes.

Kaunda had wanted to be buried at his farm next to his wife, Betty. However, sources close to the family told TimesLIVE the government wants to bury Kaunda at Embassy Park, an official national memorial site and presidential burial ground, next week.

They then want to exhume his body at a later date for a reburial to comply with his wishes.

Kaunda’s grandchildren, writing on behalf of the family, have pleaded with President Edgar Lungu to reconsider the decision to bury the beloved statesman at Embassy Park.

The letter, dated June 23 2021, reads: “We, the undersigned, representing the collective view of the family, have taken into consideration the proposal to exhume Dr Kaunda’s remains from Embassy Park after the burial to be relocated at his residence as a compromise to the family’s request.

“However, we find this proposal unnecessary as our gallant first president needs to rest in peace at his final resting place.

“We therefore humbly request the government reconsiders its decision to bury him at Embassy Park and honour what was his only final wish, to be buried next to his dear wife at his residence.”

One of Kaunda’s sons, Kaweche, confirmed knowledge of the request, saying Kaunda’s grandchildren were requesting that Lungu intervenes.

The site which is being prepared is not his wish. His wish was to be put next to our mother.

“They are requesting the president to honour his wish because the site which is being prepared is not his wish. His wish was to be put next to our mother.

“Speaking for myself, I would love them to honour his wish. This is something he said time and time again,” said Kaweche.

He said the family would seek a proper and satisfying reason for not honouring Kaunda’s wishes if the government goes ahead with its preferred burial site.

“We understand our father was a larger than life figure so if they give us a good reason and explain to us properly, we will understand,” he said.

Writing on behalf of the family on June 21, Kaunda’s eldest son, Panji, expressed gratitude to the state and Lungu for according Kaunda a state funeral. He, too, urged the government to reconsider its preferred burial site.

“Following our discussion between the family and the state representatives, it was agreed that we, as the family, would provide guidance to the state regarding his burial wishes,” reads his letter.

“Therefore, the undersigned, children and grandchildren, sat to consider government's proposal to bury him at Embassy Park and feel grateful, but the family requests, with great humility, that the state considers his wish.

“We propose the first president be accorded his last wish to be buried next to his wife, the late Mama Betty Mutinkhe Kaunda, on his farm,” wrote the retired army lieutenant-colonel who is the family’s representative in the talks, according to a family source.

The insiders have claimed it was in response to this request that the government proposed as a compromise burying Kaunda at the national monument and to exhume his body at a later date.

“The government came back in a confidential letter and said they would like to bury him at Embassy Park. They cited it is a dedicated national monument and they were more or less claiming they are controlled by law, but I think that is not the case,” said a source.

“The exhumation doesn’t sit well with us. There are one or two senior family members who are okay with it. But the old man preferred a burial site next to his wife. He was very clear about it and I think government is fully aware of it.

“Even if you want to let it go, he told everybody he wanted to lay next to his wife and no-one told him ‘you can’t’ when he was alive,” said the source.

The Zambian government could not be reached for comment.

Kaunda’s funeral is set for Friday and his burial for next Wednesday.

Kaunda's death must make us reflect on our shameful Afrophobia

A week ago, Africa lost one of its sons – the revolutionary Kenneth Kaunda, former president of Zambia and one of the most committed pan Africanists ...
Opinion
6 months ago

Kenneth Kaunda, Zambia's founding president and liberation hero, has died, aged 97, at a military hospital in Lusaka where he was being treated for ...
News
7 months ago
Next Article