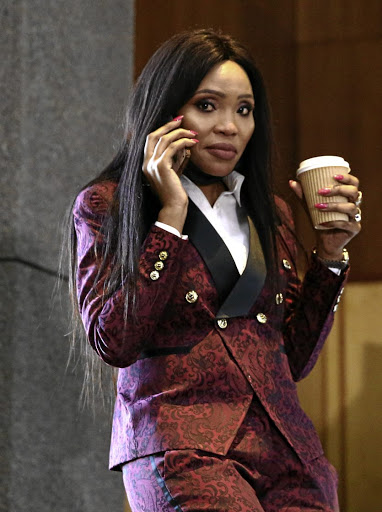 Norma Mngoma, estranged wife of former finance minister Malusi Gigaba, has accused Gigaba of filing for divorce to paint her in a bad light and discredit her testimony as that of a “bitter wife”.

During her cross-examination by Gigaba’s lawyer, advocate Richard Solomon, at the state capture inquiry on Tuesday evening, Mngoma said Gigaba tactically filed for divorce after she vowed to tell the truth about his alleged corrupt relations with the Gupta family, accused of plundering about R57bn from SA's coffers.

Mngoma told the inquiry Gigaba filed for divorce last August to drive a certain narrative about her.

“He did that so he can drive the narrative, so when I decide to speak about why I was arrested you can say I’m bitter about the divorce.

“If he really meant to divorce me, it’s almost eight months now. Since Malusi filed the summons he has never done anything. It’s me and my lawyers who keep chasing him. If he really meant it we would be divorced. I responded to his summons the day I received it. My lawyers sent an email to him saying I don’t want to contest the divorce because it is what I wanted as well.”

She said the divorce was part of Gigaba’s calculated moves, and “ trying to cover up everything so when I speak people will say she is doing this because she is bitter”.

She said when she asked Gigaba why divorce proceedings had come to a standstill, Gigaba said he needed to finish with the state capture inquiry before he could proceed so he doesn’t lose spousal privilege.

“To me it didn’t make sense why the two must be together. Why can’t I divorce him while going through the state capture inquiry ?”

Former cabinet minister Malusi Gigaba has alleged that his estranged wife Norma Mngoma was an asset used in a conspiracy against him by organs of ...
News
4 months ago

Asked by Solomon when she realised Gigaba had a corrupt relationship with the Guptas, Mngoma said she found out after Gigaba suggested she must not tell the truth about the money.

“That was the week  I asked for my gadgets and for the divorce,” she said.

Asked by Solomon why she never mentioned that in her affidavit, Mngoma said it didn’t cross her mind.

She said she couldn’t understand why money fundraised for elections, as suggested by Gigaba, had to be kept a secret. She said when she asked Gigaba why he raised money for the elections himself, he said as the head of elections it was his job to fundraise.

Mngoma, who professed to know nothing about ANC dealings and how money is raised by the party, said she didn’t think it was corruption money. She said Gigaba would at times spend “elections money” and when she asked why, he would say he would refund it.

Solomon said: “You were the beneficiary of all this money you say came from the Guptas for your wedding, for your lifestyle. Is that correct?

Solomon said he was going to argue that Mngoma’s argument made no sense and must be rejected.

Earlier during her cross-examination, Mngoma said some parts of her affidavit, and a supplementary affidavit submitted to the inquiry,  were not correct versions and she would have preferred to write affidavits herself in her own words. She also said she never took an oath when she signed the affidavit as the oath was not administered.

Deputy chief justice Raymond Zondo, who chairs the inquiry, said if an oath had not been administered that would be “quite serious”.

Mngoma’s cross-examination will wrap up on Wednesday.