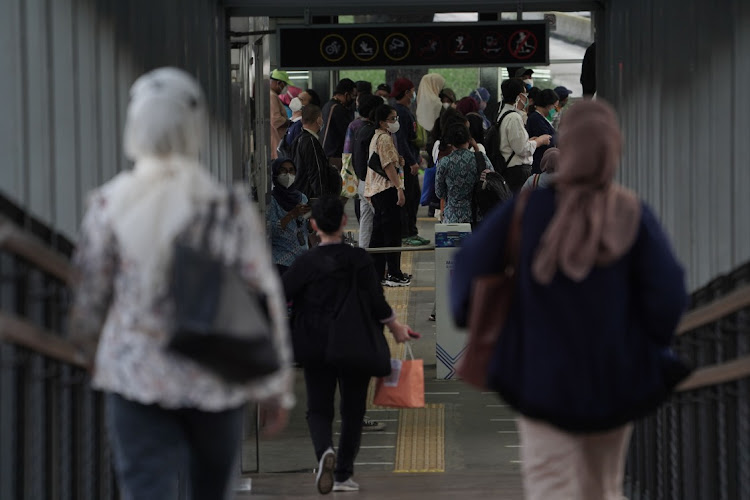 Commuters wait for a bus in Jakarta, Indonesia, on Thursday, June 24, 2021. Southeast Asia’s largest economy has seen a rapid resurgence in infections, which breached 2 million this week, as it battles the highly transmissible Delta variant.
Image: Dimas Ardian/Bloomberg

Many countries from China to Indonesia and Brazil rely heavily on Chinese vaccines to inoculate their people against Covid-19, but there are growing concerns about whether they provide enough protection against the Delta variant, first identified in India.

Below are views from China's health experts about the effectiveness of home-grown vaccines against the Delta, which is becoming the globally dominant variant, and virus preventive measures China is taking.

DO CHINESE VACCINES WORK AGAINST DELTA?

China has not provided vaccine effectiveness results against the variant based on large-scale data in clinical trials or real-world use, nor offered detailed information from lab tests, but Chinese experts are urging people to get inoculated as soon as possible.

The lack of detailed data on the Chinese vaccines against the Delta has hobbled any meaningful peer reviews by foreign experts.

It is based on analysis of infections in Guangzhou city, and Zhong told Reuters the results are preliminary and the sample size is small.

Experts say multiple factors are standing in the way of getting shots into arms, and included in those are infections among those who were meant to ...
News
10 months ago

Sinovac spokesperson Liu Peicheng told Reuters preliminary results based on blood samples from those vaccinated with its shot showed a three-fold reduction in neutralising effect against the Delta.

He said a booster shot after the two dose-based regimen could quickly elicit stronger and more durable antibody reaction against the Delta. However, he didn't provide detailed data.

Feng did not provide details including the name of the two vaccines.

The shots could still offer protection, since none of those vaccinated in southern Guangdong province, where China's first cases of the Delta variant were found, developed severe symptoms. All severe cases are from unvaccinated people.

Jin Dong-Yan, a virologist at the University of Hong Kong, said Feng's comment alone is not enough to back up the claim that Chinese vaccines are effective against severe cases, as more data is needed.

Indonesia, which has reported record daily cases recently due to a surge in the Delta variant, saw hundreds of medical workers infected by the Covid-19 despite being vaccinated with Sinovac's shot, officials said earlier this month.

It was not immediately clear, however, if the Indonesian medical workers were infected by the Delta variant.

HOW DO THEY COMPARE WITH WESTERN SHOTS?

A study by Public Health England (PHE) found in May the Pfizer-BioNTech vaccine was 88% effective against symptomatic disease from the Delta two weeks after the second dose.

That compared with 93% effectiveness against the Alpha variant, first identified in Britain.

Two doses of the AstraZeneca vaccine were 60% effective against symptomatic disease from the Delta compared with 66% effectiveness against the Alpha, PHE said.

There is no substantial data showing how protective Johnson & Johnson's single-dose Covid-19 vaccine is, and US infectious disease experts are weighing the need for booster shots using mRNA vaccines.

HOW SEVERE WAS THE GUANGDONG OUTBREAK?

The Delta infections included 146 cases in Guangdong's capital Guangzhou and several cases from the southern tech hub of Shenzhen and nearby Dongguan city.

No new domestic transmissions of any variant have been reported in the province from June 22.

WHAT CHINA HAS DONE?

Guangdong, which has 126 million people, has fast-tracked its vaccination effort since the outbreak. It had administered just 39.15 million doses as of May 19, but the number shot up to 101.12 million by June 20.

Guangzhou, Shenzhen and Dongguan quickly sealed off neighbourhoods where those who were infected and their contacts visited and launched multiple rounds of mass testing, after the protocols observed during previous outbreaks.

The cities also required those travelling out of the province to show proof of negative Covid-19 test results.

Zhong, the epidemiologist, said that without effective control measures 7.3 million people in Guangzhou city would have been infected in the first 20 to 30 days after the initial case.