WATCH | 'We are selling them for R300': Locals continue digging for stones in Ladysmith 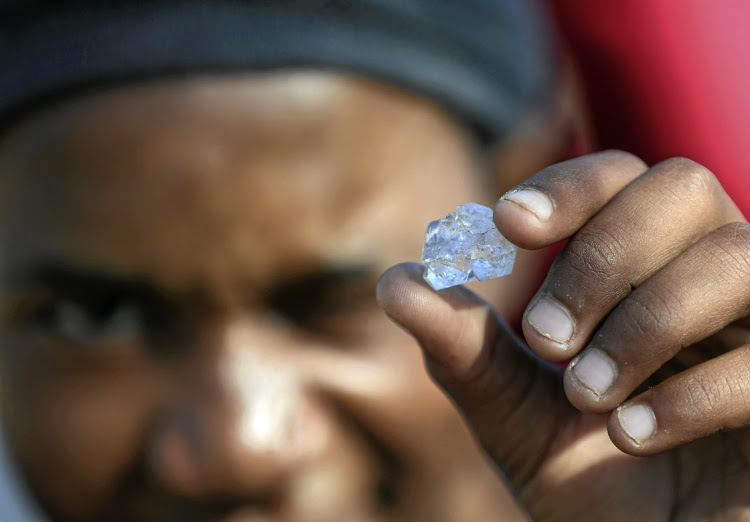 A man displays one of the shiny stones that diggers in the KwaHlathi area of KwaZulu-Natal have extracted from the ground.
Image: Reuters/Siphiwe Sibeko

Despite confirmation that the stones found in KwaHlathi, outside Ladysmith in KwaZulu-Natal, were just common quartz crystals and not diamonds, locals say they will continue digging.

Last week, hundreds of people, some from other parts of the province and country, descended on KwaHlathi, believing there were diamonds in the area.

After much digging, KZN's economic development, tourism and environmental affairs MEC Ravi Pillay said the precious stones were not diamonds.

He said tests conclusively revealed that the stones were quartz crystals.

However, speaking on SABC News, one local said he will continue digging even though the stones are not diamonds.

“Even though they say the stones are quartz, we are selling them for anything between R300 and R1,000. People are buying them and we don't know why they are buying them,” he said.

He said people in the area are not convinced by the government report.

One woman, Phindile Zikalala, told SowetanLIVE sister publication TimesLIVE that her ancestors showed her the stones in her dreams.

She said she was not disappointed by the government's confirmation.

“I am not disappointed at all by what the MEC has said. I still believe the stones will be valuable to us,” she said.

“The stones came to me in the form of a dream from my ancestors. I saw a bright white colour attracting me and also where to look for it. We started digging and we have found more than five stones,” she added.

On Wednesday, TimesLIVE reported that the KZN executive council called for diggers to stop digging in the area or else they would “face the full might of the law”.

The council said, from Thursday, law enforcement operations would “kick in” and halt digging.

“The provincial executive council has further expressed its concerns about reports that illegal mining is still continuing in the area. The provincial government is urging people to move away from the site and abide by the law with immediate effect,” said the council.

Despite preliminary findings that the stones discovered at KwaHlathi, near Ladysmith in KZN, are not diamonds, locals continued their search on ...
News
1 year ago

The “precious” stones that attracted thousands of people to KwaHlathi, near Ladysmith in KwaZulu-Natal, are not diamonds but quartz crystals and ...
News
1 year ago
Next Article