A return to Giyani’s days of old, including bare-knuckle fights 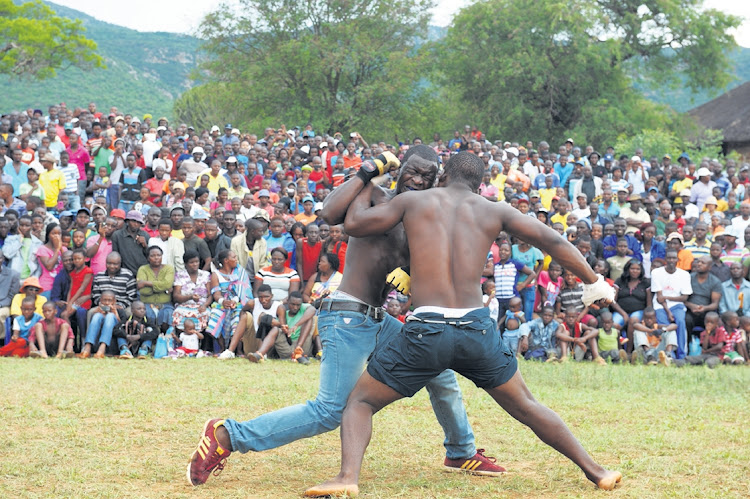 Bare-knuckle fights have always kept supporters glued to their seats as gladiators pounded each other to submission.
Image: Elvis Mushiana

In another time, a patch of ground on the outskirts of Limpopo’s Muribani village was a revered arena where xibakela gladiators with nicknames such as Two-Two, Bawuri Fish, Guarantee and others enthralled crowds by trading punches in the popular men’s game of bare-knuckle fighting.

The duels at Muribani near Giyani drew crowds by their thousands, much to the chagrin of the apartheid government, which was wary of black people gathering in great numbers.

So popular were the games that traders flocked to the site to sell food, beer and livestock. Muthi traders also came to sell their potions to the fighters who believed these would help them pack a mean punch to beat their opponents.

But the games were eventually discontinued on New Year’s eve of 1969, allegedly due to the apartheid government fearing the gatherings would serve to mobilise the oppressed people of the area politically.

Half-a-century after the last bout took place here, 62-year-old business person and community builder Mackson Mahlawule of Shihosana village in the Collins Chabane local municipality is restoring the ground that was once the pride of the villages near Giyani.

As a youngster, he used to join the crowds to cheer on the fighters. Mahlawule has been troubled by seeing this spot which was located near a cattle dip destroyed by illegal sand miners.

“I went to the local chief to apply for permission to utilise the land and they agreed,” he said.

Mahlawule then approached other influential citizens who joined him in starting the Muribani Cultural Village and Entertainment co-operative.

The site now boasts a cultural village, lodge, camping and picnic sites. It also has facilities for netball, and a pitch for “river sand soccer” – a village version of beach soccer. The area has now been accepted as part of the Rixile Tourism route.

Mahlawule said according to oral accounts passed down by village elders, the bare-knuckle fights started in the 1940s when people from villages such as Muswane, Nhombelani and Shihosani came to dip their cattle in Muribani.

As they waited for their livestock to be dipped, they whiled away time by engaging in the age-old game of tough guys. Before the fighters took on one another, they would pit bulls from rival villages to fight each other as a ceremonial opening match.

“Muribani was a drawcard because there were no dipping tanks in many villages. But the government later built dips in various villages and ever since they have been dipping their cattle in their own areas, it was not possible for them to come to Muribani and the support suffered,” said Mahlawule.

Although Mahlawule was still a young, wide-eyed village boy when xibakela was last played in Muribani, he remembers it all as if the fighters exchanged blows just yesterday.

“Two-Two had shocked Guarantee, who had until then been regarded as invincible, by beating him in an earlier encounter, getting him swollen for the whole solid week,” he said.

In the second fight, Guarantee pummeled his opponent until he surrendered. After that the fights that had stirred interest in the entire former Gazankulu and Venda homelands ceased.

Mahlawule said it was widely believed the apartheid government established dipping tanks in other villages as a strategy to cancel out the large gatherings.

Not so long ago Muribani hosted Mildred Oliphant, then minister of labour, who came to launch the Vhembe tertiary co-operatives. But the Covid-19 pandemic now poses a threat to the future of the sport because it involves close body contact with no gloves or any form of body protection. Muribani has also hosted many soccer tournaments and music festivals.

Guarantee, now 77 years old, is happy that his former happy hunting ground is no longer a wasteland. He is still the reigning champion from the last games hosted there in 1969. “But unlike those of us who fought for nothing, big business should get in and support the sport,” he said.

Mahlawule said they are ready to host not only xibakela but different types of games. “Our cooperative is doing a lot to make young people busy, to make them know what people in the past did,” he said.

First for women in 'musangwe'

Women have finally been allowed to participate in musangwe (bare-knuckle fighting) tournaments in Venda, Limpopo. Musangwe is a traditional Venda ...
News
6 years ago

ONCE a year, men gather in a remote area in Limpopo to fight with their bare hands in honour of their ancestors' ways. This year's bare-knuckle fight ...
News
8 years ago
Next Article