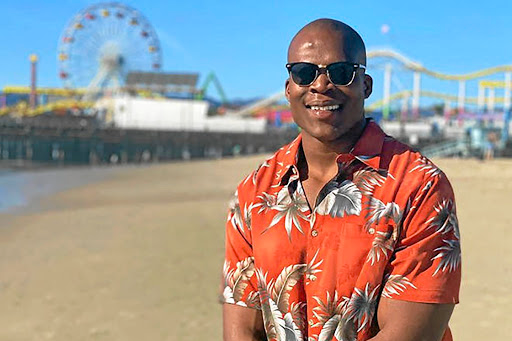 New footage from the Honolulu home where Lindani Myeni was shot dead has opened old wounds, with many on social media calling for justice for the slain former rugby player from KwaZulu-Natal.

Myeni was shot by police in Hawaii in April after they responded to an alleged “burglary in progress” at a home in Nuuanu.

On Tuesday, unedited footage was released showing the moments that led up to Honolulu police officers killing the 29-year-old.

The six-minute-long video is composed of surveillance footage from a doorbell security camera, 911 audio recordings and newly obtained body camera footage from the officers who killed Myeni.

It shows a couple walking into the building, followed by Myeni wearing his umqhele, a traditional ceremonial Zulu headband, something he would wear to visit a spiritual place like a church or temple.

Before entering the house, Myeni can be seen taking off his shoes, and seconds later a woman can be heard calling 911 to report a “break-in”.

Myeni can be heard repeatedly saying “sorry” to the couple and having a brief conversation with a male who was on the phone with the landlord.

“The couple testified that Myeni never came closer than one to two metres and made no physical contact. On the 911 call, the woman confirms to the operator that Myeni is not armed, shouting or threatening. The landlord has confirmed in a deposition that no property was taken, missing or otherwise disturbed,” said Bickerton.

He alleged the family was still waiting for Myeni’s cellphone and his legal team would continue to dig for facts in the case in the next coming weeks.

Myeni's wife, Lindsay, said the footage confirmed that her husband was innocent.

The pair lived in Hawaii with their two children.

“We all knew you were innocent. Murdered by police senselessly. They feared your golden skin,” said Lindsay.

“I can’t even say anything. You hated racism. You kept talking about wanting to go to law school to help fix this broken system. I just wish I could talk to you. Just hear your beautiful voice. Feel your big hugs. The kids and I miss you kakhulu (so much).”

On social media, scores demanded that justice be served for Myeni's death.

Here is snapshot of what many had to say:

The unedited video's that were released show Lindani Myeni was murdered.

This videos heartbreaking 💔 He even left his shoes outside 😭😭#LindaniMyeni

my heart truly hurts for Lindani Myeni. i don’t care what anyone says. after that security camera footage, you can’t tell me that wasn’t set up. i pray he gets justice. i pray whoever was wrongfully involved get what they deserve.

That unedited video of Lindani Myeni is so heartbreaking as he remained calm and respectful, ezifake umqhele 💔

#lindanimyeni People can we start a movement for Lindani's family.

WATCH | 'Do or die. Blood in, blood out': Lindsay Myeni likens US police to gangs

A gentle smile touches the lips of Lindsay Myeni as she recounts the events of April 14 — a day spent frolicking in the sea and soaking up Hawaii's ...
News
4 months ago

"I keep asking God if he is OK." - Lindani Myeni's widow Lindsay
News
4 months ago

"I don’t want to raise kids that are considered black in America, where it's clearly not safe,” Lindsay said.
News
4 months ago
Next Article