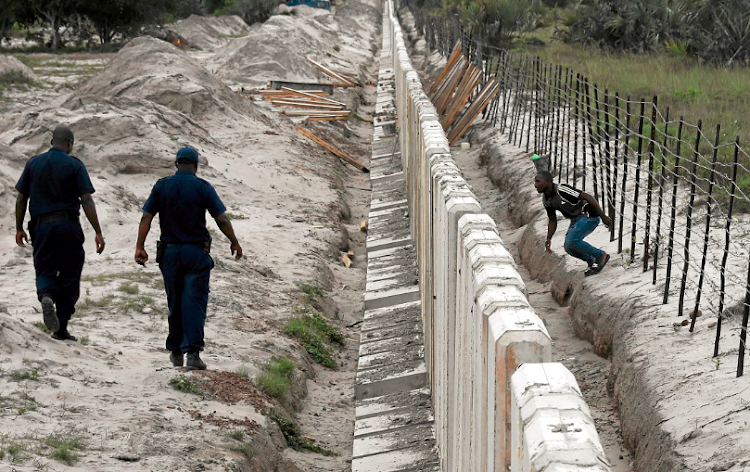 A man brazenly tries to cross into SA through the border fence with Mozambique while SA security officials patrol next to the unfinished concrete barrier wall. File image.
Image: Sandile Ndlovu

President Cyril Ramaphosa has signed a proclamation authorising the Special Investigating Unit (SIU) to probe the KwaZulu-Natal department of transport on allegations of corruption and maladministration involving a R85m Mozambique concrete barrier project.

The investigation will focus on the construction of an 8km concrete barrier wall between uMkhanyakude and the Mozambique border, which was meant to protect communities plagued by cross-border hijacking syndicates.

An October report of the portfolio committee on public works and infrastructure shows only 0.166km of work was completed and “an enormous amount of R48m had already been paid to the contractor”.

The SIU’s Kaizer Kganyago said the construction had allegedly started despite the legal mandate for the project resting with the public works and infrastructure department.

“The SIU investigation is aimed at determining whether the procurement and payments made in relation to the construction of the barrier were done in a manner that was fair, competitive, transparent, equitable or cost-effective, or contrary to applicable legislation and guidelines issued by the National Treasury or relevant provincial treasury,” he said.

SIU has completed 40% of its Covid-19 PPE probes, but more cases pour

Special Investigating Unit head advocate Andy Mothibi says the unit has concluded 40% of the 4,117 Covid-19 related cases it has been investigating ...
News
7 months ago

'Corruption within the built environment has run rampant for too long,' public works minister Patricia de Lille said on Monday.
News
8 months ago

Public works and infrastructure minister Patricia de Lille has blamed the lack of progress in sanctioning offenders on the involvement of many ...
News
8 months ago
Next Article