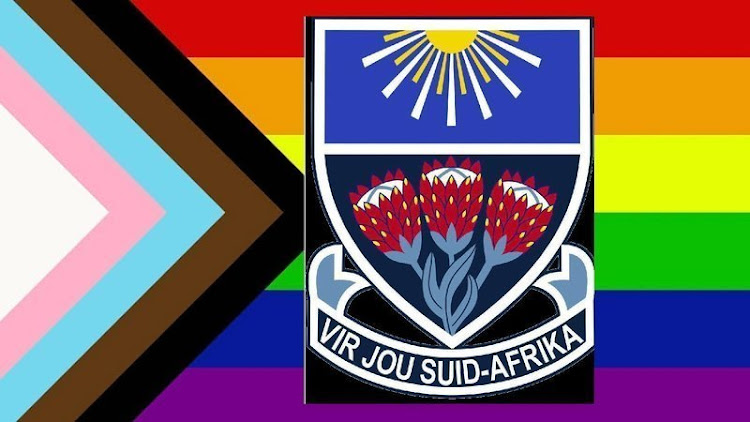 The DF Malan High School emblem superimposed on a Pride flag on change.org, where thousands of people signed a petition calling for the school to crack down on homophobia.
Image: change.org

Cape Town’s DF Malan High has issued a public apology after pupils were banned from staging gay pride events at the school.

The pupils ended up gathering informally during break to celebrate International Pride Month, but were verbally abused by several other pupils. The incident prompted school management to ban further pro-pride events and gatherings at the school.

However, on Friday the school governing body (SGB) issued an apology “regarding how events unfolded” and welcomed a SA Human Rights Commission (SAHRC) investigation into last week’s incident.

“The SGB has noted the SAHRC’s intention to investigate the events that transpired during a recent gay pride event at the school,” said SGB chairperson Andre Roux.

“Although we have not yet received a formal notice from the SAHRC about the proposed investigation, we would like to provide assurance that the school will give its full co-operation to the activities and officials of the commission. We welcome the investigation in the hope it will be in the best interests for the school and its pupils,  and that it will assist us in preventing a repeat of the unfortunate events in the future.”

“I am deeply concerned by the allegations of discrimination against LGBTQI+ pupils at DF Malan High School,” Schafer said.

“Such behaviour has absolutely no place in our schools.

“We will work with the school to ensure such incidents are not repeated in future. The department is committed to ensuring our schools are inclusive spaces, where values of equality and non-discrimination are upheld. We expect our schools to take active steps to promote such an environment,” she said.

The incident prompted outrage on social media and a petition in support of the pride pupils.

The father of one the affected pupils also spoke out this week, slamming the school for targeting the pride pupils instead of pupils who had spewed verbal abuse and homophobia.

“There needs to be a programme to educate people, to bring this out into the open,” said the parent, who asked to remain anonymous for fear of inviting further verbal abuse of his child.

A parent of one of the affected pupils also spoke out this week, slamming the school for targeting the pride pupils rather than those who targeted ...
News
1 year ago
Next Article