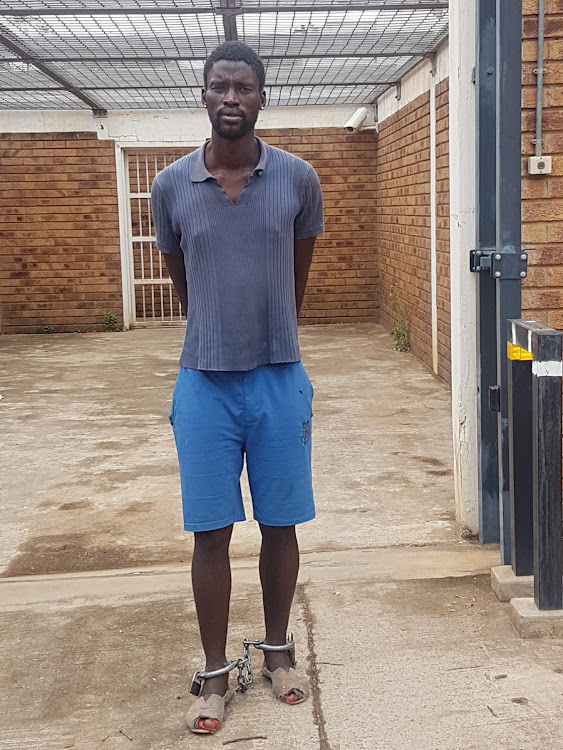 Xolisa Sojada, who found his victims through a Facebook page under a false name, seen at the Mthatha court precinct. He has pleaded guilty to three murders.
Image: ZIYANDA ZWENI

An East London mother, Phindiwe Grey, gave moving testimony on Wednesday about how her daughter, Nolonwabo Grey of Duncan Village, was kidnapped, raped and murdered by a man who had called her family and demanded R3,000 ransom for her release.

The 69-year-old widow’s pain echoed through her testimony in the Mthatha high court.

Her daughter was one of three young women murdered by the man dubbed the Qumbu Facebook rapist.

The 69-year-old widow, who walks with two crutches, screamed at the man who has confessed to killing her daughter. He stood unmoved.

Nolonwabo’s body was found on October 30 2017 near the Ncakuleni grazing land in Qumbu. She was the last of the three young women allegedly killed by Xolisa Sojada.

He found his victims through his fake Facebook page under the name Neo Jerry.

He told judge Richard Brooks where he had killed and dumped his victims.

In her testimony, led by the prosecutor, advocate Mbulelo Nyendwana, the grieving mother told how she had got the shock of her life when she received a call on the night of October 29 2017 from her terrified daughter asking her to send R3,000 to a man who was holding her hostage.

“She was crying and sounding terrified, begging me to borrow R3,000 and send it to her as quickly as we could. She did not talk long and the phone was apparently taken from her.

“I heard a man demanding the money if we did not want my daughter to be killed. I begged him to give us until the next morning for us to borrow the money and send it to him.

Police showed us pictures on the phone and we identified the shirt and the shoes worn by this criminal, sitting there in my daughter’s clothes.

“The following day he again called, demanding the money, but after we deposited it he apparently switched the phone off and we never reached him on my daughter’s phone, which he used to phone us.”

She opened a case at the Duncan Village police station and was told a woman’s body had been found in Qumbu.

“The same day, police took us to Mthatha, where we identified the body. We were asked to identify my daughter’s clothes and we did.

“Nolonwabo’s green shorts and shoes were missing. Police showed us pictures on the phone and we identified the shirt and the shoes worn by this criminal, sitting there in my daughter’s clothes.

“Even at his first court appearance he was wearing my daughter’s shorts and shoes.”

Sojada has pleaded guilty to the three murders, but not the six rape cases.

Brooks has yet to give his verdict on the charges.

The trial continues on Thursday.​