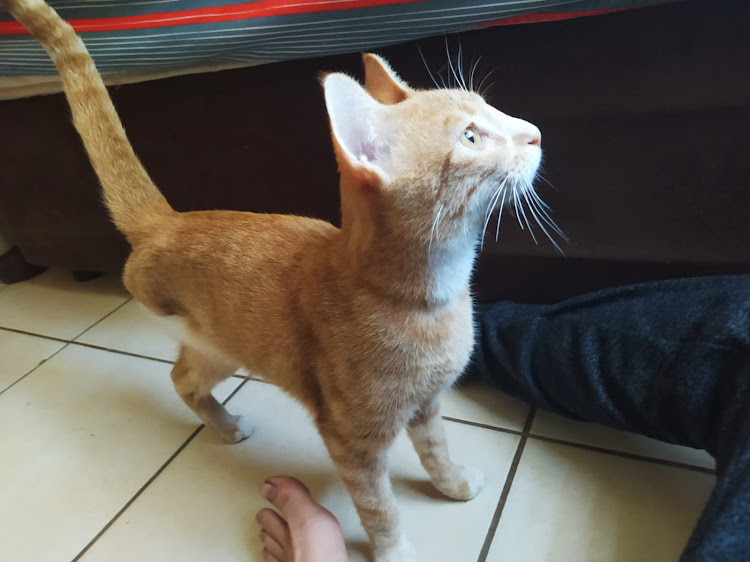 Atlas the three-legged rescue cat will be removed from his adoptive home.
Image: Supplied

A Westville, Durban, couple under suspicion of mistreating two kittens have consented to a final court order permanently removing the one surviving kitten — which recently had its leg amputated — from their care.

The couple also agreed to donate R10,000 to Kitty Care, the organisation which initially handled the adoption of Atlas and Hyperion in December.

Last month Kitty Care launched an urgent high court application, securing an order for the immediate removal of Atlas after the death, under mysterious circumstances, of Hyperion.

When the matter returned to court this week, judge Rashid Vahed said he was very disturbed by the allegations in the papers and thanked Kitty Action, attorney Mark Leathers and advocate Andre Stokes for intervening.

The initial removal order was granted by judge Khozi Hadebe and was acted by the sheriff, accompanied by a representative of the kitten welfare organisation.

It is believed the couple resisted handing over the cat, but did so after consulting an attorney.

Owning man's best friend is not suitable for everyone

I have often wondered why some people decide to own dogs when they are either not in a position or don't have the appropriate temperament to do so.
Opinion
8 months ago

In the court papers, Kitty Care’s Kyleigh Malkin-Page described how both cats had sustained strange injuries while in the couple’s care.

Hyperion had sustained a broken femur in January.

In March, Atlas suffered a severe injury to his hind leg, which resulted in the amputation.

Malkin-Page said while Atlas was still recovering at the vet, the wife contacted Kitty Action again, saying Hyperion was limping.

“We first thought it may be from the pre-existing injury. But he was taken to the vet and diagnosed with a tibial fracture on the other leg. The vet said the most likely cause was blunt force trauma.”

Neither could ever offer any explanation as to how the cats had been injured so seriously so many times while in their care.

And then, in early April, the wife messaged Malkin-Page to say Hyperion had died after he and Atlas got into a fight.

“She sent me a video of him dying. It can clearly be seen that Hyperion was soaking wet and, when questioned, she said this was because her husband had wiped him down,” she said.

“Considering that Atlas had a recently amputated leg, the suggestion that he killed Hyperion in a fight was ridiculous. Neither could ever offer any explanation as to how the cats had been injured so seriously so many times while in their care. They said the cats are contained indoors. One of the cats is now dead and the other disabled.

“Given the nature of the repeated injuries, read with the vet’s comment that blunt-force trauma is the most likely cause, it appears that the cats were ill-treated, possibly abused. That they have been able to give no other explanations, that inference is inescapable.”

When Kitty Care demanded the return of Atlas, the couple’s attorney said his clients had taken the best possible care of their cats “under undue and unlucky and unforeseen circumstances”.

The attorney also said the cats were both “strays” and Kitty Care had no claim to them.

Atlas is being cared for by a Kitty Care representative.