'I have built a life in SA and consider it to be my permanent home,' Iqbal Sharma says in an affidavit before the Bloemfontein magistrate's court 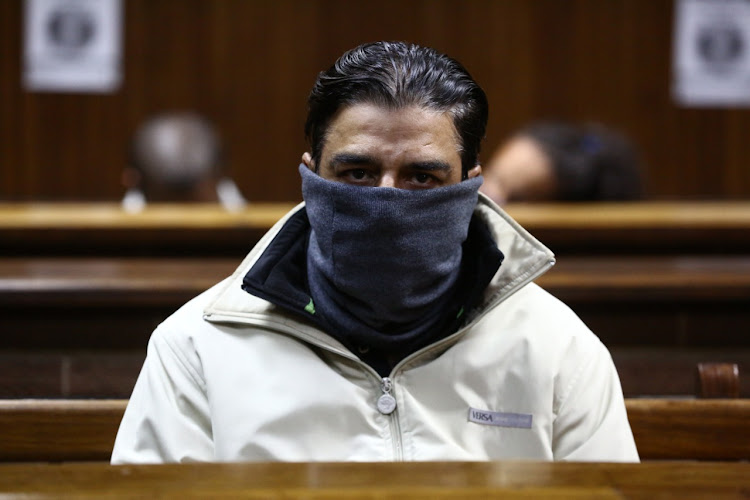 Businessman Iqbal Sharma, accused of being a Gupta ally, says he is not a flight risk and should be granted bail. Sharma appeared in the Free State magistrate's court on Monday, with his bail hearing set to continue on Tuesday.
Image: Thapelo Morebudi

If I was going to flee SA or evade trial, I would have done so by now.

So says key “Gupta associate” and businessman Iqbal Sharma in an affidavit filed before the Bloemfontein magistrate's court on Monday.

Sharma said the state viewed him as a flight risk, but claimed he was anything but. He would voluntarily hand over all his travel documents to the investigating officer and the prosecutor dealing with the matter. Added to this, he considered SA as “home”, his wife was a permanent SA resident, and they had property in the country.

In paragraph 31 of his affidavit, he says: “If I had any intention to flee SA or to evade trial, I would have done so by now, given that I have been aware of ongoing investigations against me since 2018.

Later, he says: “I have built a life in SA and consider it to be my permanent home. I have no intention of emigrating nor do I have any reason to do so. I am not a flight risk and, if necessary, I am prepared to surrender my passports to the SAPS, together with my UAE [United Arab Emirates] residence pending the finalisation of the trial.”

In his affidavit, Sharma said it was likely that the Guptas, given the manner in which they have dealt with these matters in the past, would oppose any attempt to extradite them from wherever they may be and they would likely challenge the legality of the arrest warrants issued by the National Prosecuting Authority (NPA).

Sharma said it was also likely that other accused who have been cited in the state’s indictment were scattered across the world, and this could mean that various applications would have to be fought by the NPA in jurisdictions across the globe.

“This will result in a significant delay in my trial commencing. I cannot be expected to remain incarcerated while these skirmishes are ongoing which do not ultimately concern me, and I should be afforded the constitutional right of my liberty and freedom in the interim and to furnish meaningful instruction to my legal representatives,” he said.

Sharma also denied having any ties to the Gupta family, saying he last saw them in 2014.

Sharma claimed he last saw fellow partner and Gupta lieutenant Salim Essa in Dubai in December 2017. Sharma said he briefly bumped into Essa at the hotel where he and his wife Tarina Patel stayed.

“That meeting lasted about two minutes, when we greeted each other and exchanged brief pleasantries. I have no association whatsoever with the Gupta family. The state has made bald allegations of my association with the Guptas. There is no merit to this,” he said.

Sharma was arrested last week along with Dr Limakatso Moorosi, from the Department of Agriculture,  Seipati Dhlamini, who was the department’s financial officer, and former Free State department of agriculture head Peter Thabethe in connection with the failed R288m Estina dairy  project.

On Monday afternoon, Sharma’s bail proceedings were delayed after the state told the court that they could not proceed.

Sharma said after his court appearance on June 3, he was transported back to the police holding cells at Baisvlei to consult with his attorney, but he was unable to have a “meaningful consultation” due to certain conditions at the station. Sharma said the consultation room did not have any chairs or desks; the room had open windows and on the other side was a “galvanised sheeting such that the wind was blowing into the room and it was extremely cold”.

He said they were also locked in the room and he did not have access to documents which might have been relevant to the case because his computer was in Sandton.

In his affidavit, Sharma said he was self-employed as a business consultant. He said he was married to Tarina by Islamic rites, in community of property. Tarina, he said, was a permanent SA resident, but he was born in the UK and had a UK passport as well as a South African ID and passport.

They had no children and both his parents were deceased. Both his siblings live in the US.

Sharma said he was not a flight risk and had built a life in SA and considered it to be his permanent home.

He said he intended to plead not guilty and could afford bail of R100,000.

The matter will resume on Tuesday.

A luxurious mansion in Sandton, Johannesburg, once described as the "oasis in the middle of the city" and worth about R12m is among assets owned by ...
News
7 months ago

A luxurious mansion in Sandton, Johannesburg worth about R12m is among assets owned by alleged Gupta lieutenant Iqbal Sharma and his reality tv star ...
News
7 months ago

Gupta family homes worth millions seized in Constantia and Sandton

Gupta family homes have been seized, following an order granted by the high court in Free State.
News
7 months ago
Next Article