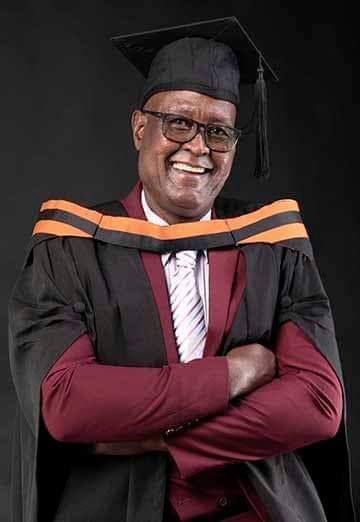 Legendary sports commentator Zama Masondo, who recently graduated with a master's of arts degree in African languages through the University of South Africa, wants to inspire young people to take education seriously.

“I wanted to show them that education is empowerment. But most importantly it feels good to say to people I’m a proud holder of a master’s degree. This master’s degree will go a long way when I become a board member in different companies. I’m not looking for employment but I can make an exception if they are paying well. I’m doing all this for my own satisfaction because I will be running my own business that I don’t want to talk about it at the moment," he said.

“It was difficult but I spent most of my time at that Unisa library in Pretoria. I was there almost every day.  Even at work I spent most of my time studying. When I travel with TV commentary work, when the match ends I will get to the hotel and start studying from 11pm until 2am in the morning. When I got to the airport before I flew I would study. I am going to continue with the topic when I start my PhD next year because I cannot wait to be called Dr Masondo.”

Masondo began his career at the SABC in the early 1980s and has made a name for himself in the sport broadcasting industry.

No soccer, no pay for freelancers
Sport
1 year ago

Gwede Mantashe graduates with an MBA

Mineral resources minister Gwede Mantashe has graduated with a Masters in Business Administration degree.
News
7 months ago
Next Article