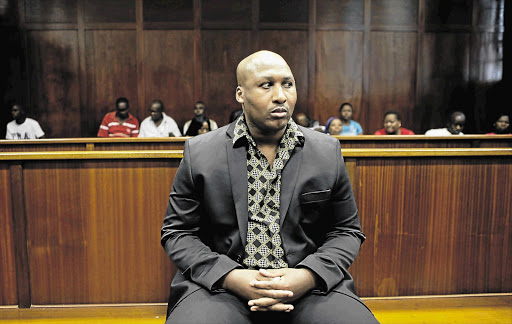 Joseph Ntshongwana, a former Blue Bulls rugby player sentenced in 2014 to five life terms for four murders and a rape, has failed in his bid application to have his conviction and sentence set aside. File photo.
Image: Tebogo Letsie

Former Blue Bulls rugby player Joseph Ntshongwana, who was sentenced in 2014 to five life terms for four murders and a rape in 2014, has failed in his bid for freedom.

Dubbed the “axeman”, Ntshongwana applied for leave to appeal both his conviction and sentence, but three KwaZulu-Natal judges rejected his claims that he was mentally ill and could not be held responsible for his actions.

During his lengthy trial before acting judge Irfaan Khalil in the Durban high court, he pleaded not guilty to nine charges, relying mainly on a defence of pathological criminal incapacity, submitting as part of his plea a report from a psychiatrist who diagnosed him as having a “delusional disorder”, believing he was going to be harmed, poisoned or killed.

Ntshongwana’s arrest followed a spate of murders around Durban in which victims were attacked with an axe and decapitated and believed to be at the hands of a serial killer.

Apart from the murders and rape, he was also charged with assault, kidnapping and attempted murder.

While state witnesses were cross-examined, their evidence was not disputed by Ntshongwana, who claimed he had no memory of committing the crimes. He did not testify.

In the appeal judgment, judge Vusi Nkosi, with judges Rashid Vahed and Esther Steyn concurring, said the issue for determination was whether, at the time of the crimes, Ntshongwana lacked the capacity to appreciate the wrongfulness of his conduct, or to act in accordance with such appreciation.

His advocate Jimmy Howse argued that he lacked criminal capacity, as shown by several medical reports submitted during the trial which reflected he had a history of mental illness, diagnosed as schizoaffective disorder, bipolar type and presenting with symptoms of paranoid persecutory delusions.

Nkosi said the views expressed by the experts regarding his state of mind at the time of the commission of the offences was “purely speculative”.

“The appellant [Ntshongwana] is the only person who could attest to his state of mind. His decision not to testify left the trial judge with, at best, conflicting opinions of the experts.

“He claims he suffered from amnesia and had no recollection of committing the crimes. Considering the offences were committed in two distinct spurts, covering a period of four months, it is highly improbable, if not untrue, that he could suffer from amnesia over such a long period,” the judge said.

He noted that during an interview with one expert, he was able to remember the circumstances surrounding the rape incident. While he claimed the victim had been his girlfriend, he had been able to give an explanation of his conduct at the time.

The same applied to his explanation given to the police regarding traces of blood in a car he had hired.

“He was able to remember and give some explanation as to how the blood had got there, which created doubt in the mind of the trial judge about his claim of amnesia.

“In any event, mere loss of memory is not and never was a defence to a charge of murder.”

Medication did not improve condition

The medication that alleged Durban axe murderer, former Blue Bulls rugby player Joseph Phindile Ntshongwana, had taken for his mental illness had not ...
News
8 years ago

He said the evidence showed the crimes were well-planned, calculated and purpose-driven. Except for the kidnapping and rape, all were done under cover of darkness and he immediately ran away when he realised people were watching.

No evidence was led to show he acted with diminished responsibility.

Nkosi said taking into account the brutal murders of his victims who he slaughtered “mercilessly like animals”, and the sadistic rape of the women over an extended period of four days, the sentences imposed were not only just, but also appropriate.

All were hacked to death with an axe. Two victims were beheaded.

He also raped and kidnapped a woman. He attacked and tried to kill two men, one in Umlazi on March 21 2011, and the other in Lamontville on March 23.

After sentencing, a relative said they did not agree with the judge’s ruling because Ntshongwana’s mental condition has not been taken into consideration.