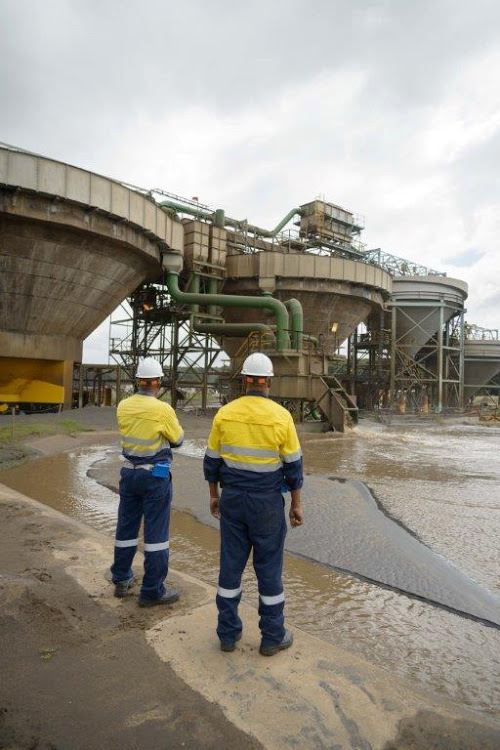 Police in KwaZulu-Natal say they are investigating a case of malicious damage to property after four machines were allegedly burnt by protesting community members on Friday. File photo.
Image: www.riotinto.com

Police in KwaZulu-Natal are investigating a case of malicious damage to property after heavy machinery was allegedly set alight at Richards Bay Minerals (RBM).

KwaZulu-Natal police spokesperson Col Thembeka Mbele said no arrests have been made so far.

She explained that the incident occurred on Friday, just before midday.

“It is alleged that a group of community members arrived at the business premises and burnt four machines. The circumstances surrounding the incident are being investigated by KwaMbonambi SAPS,” Mbele said.

In a statement, trade union United Associations of SA (Uasa) called on President Cyril Ramaphosa, mineral resources and energy minister Gwede Mantashe, the provincial government and the police to restore order and safety to the mine’s operations.

“The violence and destruction at RBM are out of hand and cannot be allowed to continue,” the union said.

RBM is the largest taxpayer in KwaZulu-Natal, contributing R6.2bn annually, said the union.

According to the union, the issue of employment of locals at the mine is at the centre of the feud between the community and the mine.

Last month, a senior manager at the mine, Nico Swart, was shot dead while on his way to work.

The union said it feared that after the murder combined with the burning of bulldozers and other heavy equipment, the company may close operations in the country.

“Rio Tinto, the international mining company that owns RBM, threatened early last year to close the mine that employs about 5,000 workers. Rio Tinto has also threatened to hold back on a R6.5bn investment in RBM, which it had pledged during the Presidential Investment Summit in late 2019,” said Uasa. With continued crime, “the company may go through with it”, said the union.

“The mine and its workers deserve nothing less than immediate action to secure operations, jobs and safety.”

On June 3, Mantashe travelled to Richards Bay to meet senior executives at RMB. During the meeting, he expressed the government's concern after Swart's death.

KwaZulu-Natal premier Sihle Zikalala has appealed for calm after a hit on a senior executive at Richards Bay Minerals on Monday.
News
5 months ago

“Richards Bay Minerals is a very important company, not only for KwaZulu-Natal but in the context of mining nationally. A criminal activity is not a mining activity — once you commit a crime you then create a crime scene, and the police must take over. Richards Bay Minerals is an important stakeholder in KwaZulu-Natal with regards to investments and its continued existence is dependent on what we do to preserve Richards Bay as a prime investment area. People in Richards Bay must protect RBM as their asset ... The safety and security issues affecting Richards Bay are not only a threat to the province but the country,” said the minister.

The KwaZulu-Natal community safety department and the provincial government delegation had received confirmation from law enforcement agencies that the criminal and murder cases in the town had been prioritised, Mantashe said.

“The case dockets have been consolidated and are with a team of dedicated investigators and combat teams. The investigations are at an advanced stage and police will work closer with RBM to get to the root cause of the criminal elements in the area.”

Rio Tinto MD Stephane Leblanc was quoted as saying: “For us the safety and security of our employees is paramount. We have been working hard to reduce the risk to our employees to ensure that they work safely. We would like to closely work with you [the government] to find a way to ensure that those that are behind these murders are brought to book.”