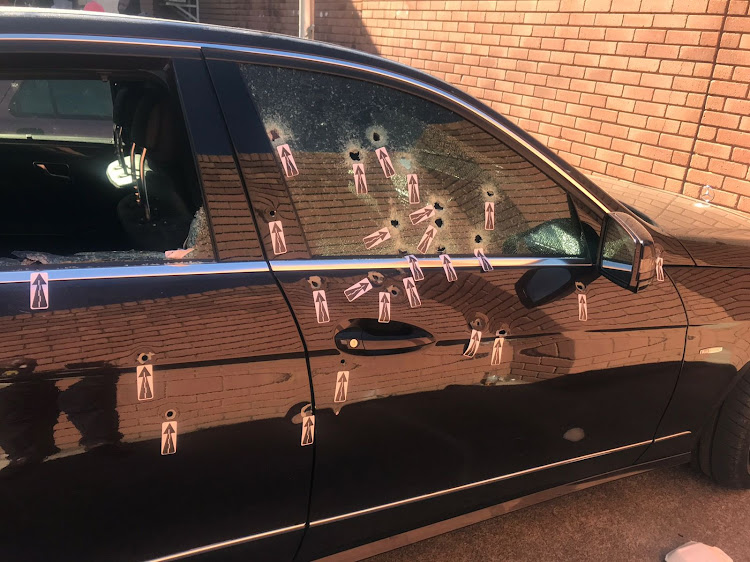 Teboho Makhoa of the Gauteng human settlements department died on Friday night when 28 gunshots were fired at his car.
Image: Twitter: Yusuf Abramjee

A Gauteng department of human settlements employee was shot dead in Spruitview at the weekend.

Police spokesperson Capt Mavela Masondo said police have opened a case of murder for investigation after the body of a 52-year-old man was found inside a car with gunshot wounds.

“Police were conducting routine patrols when they noticed a car parked in the middle of Brickfield Road in Vosloorus at about 00h05. In the driver's seat, police found a man with gunshot wounds. The car had bullet holes on the side of the driver. Paramedics were called and the victim was certified dead,” Masondo said.

He said the motive for the killing cannot be confirmed at this stage.

Photos of his bullet-ridden vehicle have been shared on social media. Initially, people reported that he worked for the City of Ekurhuleni but the city has clarified that he was a provincial employee.

KwaZulu-Natal premier Sihle Zikalala has appealed for calm after a hit on a senior executive at Richards Bay Minerals on Monday.
News
8 months ago

A spokesperson for the city, Phakamile Mbengashe, told SowetanLIVE's sister publication TimesLIVE the deceased, Teboho Makhoa, worked for the Gauteng department of human settlements but his office was situated within the Ekurhuleni offices.

“He was the head of beneficiary management for the province and worked from our offices,” Mbengashe explained.

Head of communications for the department Tahir Sema said they were shocked by Makhoa's murder.

He said the “senseless killing” took place on Friday night when 28 bullets were fired at his vehicle.

“We call on law enforcement agencies to do their work and apprehend the killers.”

Makhoa and colleagues in the regional office were “working tirelessly to allocate the rightful beneficiaries into their RDP houses, remove illegal occupants from occupied RDP houses and prevent future occurrences of land and house invasions in the region”, said the department.

MEC Lebogang Maile said: “This cowardly act will not deter us from our mandate to provide quality housing opportunities to those who deserve it the most.”