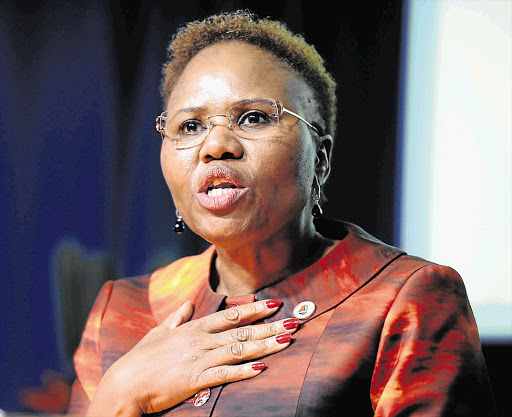 Zulu was responding to a parliamentary question posed by the EFF about the implications stopping the SRD grant for poor South Africans.

The R350 monthly grant was announced by President Cyril Ramaphosa last year to help those affected by the pandemic lockdown, and was meant for unemployed citizens and qualifying foreign citizens.

The National Treasury allocated R2.1bn to extend the grant until the end of April, and there have been growing calls to extend it.

Groups such as the Black Sash, #PayTheGrants, the Institute for Economic Justice (IEJ) and The Studies in Poverty and Inequality Institute (SPII) said in a joint statement: “Income support for millions of destitute people has been cut off, leaving them to face a Covid-19 third wave without any means to afford food and other basic necessities. There is no justification for terminating the Covid-19 grant.”

In a written reply to the EFF's question, Zulu said: “The evidence provided by the various research, and analysis, confirms the assumption that ending relief programmes will reduce household demand as well as increase hunger and social alienation.

“These factors will add to social and political stress, which in turn will slow down the economic recovery over the coming year or two at least.”

Zulu said 10 million applications were received for the relief grant, and studies confirmed “that the relief measures have made significant impact on the livelihoods of not only those receiving the grant, but also those in a household of a grant recipient”.

The evidence provided by the various research and analysis confirms the assumption that ending relief programmes will reduce household demand as well as increase hunger and social alienation.

She added: “From our rapid assessment study, we found that around 88% of recipients of the Covid-19 SRD grant pooled the grant with their other household incomes to take care of the needs of everyone in the household; thereby confirming that the reach of the grant to reduce poverty thus goes far beyond just the recipient.

“It is estimated that between the child support grant caregivers allowance and the Covid-19 SRD grant of R350, about 36 million individuals benefited from these both directly and indirectly.”

“This triangulates well with other research indicating that hunger declined during the period May to October 2020 when the relief package was at its maximum level and then increased from November onwards when part of the relief package, and notably the caregivers allowance, was withdrawn,” said Zulu.

“It is expected that with the withdrawal of the last portion of the relief package, whilst in the third wave of the pandemic, more households and individuals will become vulnerable to hunger.”

Zulu added that research findings by The National Income Dynamics Study — Coronavirus Mobile Survey, 2020 (NIDS CRAM) confirmed that the special Covid-19 grant “has brought millions of previously unreached individuals into the system, and application for and receipt of the grant has been relatively poor”.

She said the department’s rapid assessment study further confirmed that “not only were we able to prevent further deepening of food poverty but also decrease this from 20.6% to 18.8%".

“Comprehensive social security helps protect people from economic shocks by operating as an automatic stabiliser that is built into the tax-benefit system, and there is an urgent need to establish social assistance for poor people of working age, as a permanent rather than temporary feature of the system.”

Opposition MPs criticise termination of R350 grant — 'a lifeline for many'

Opposition parties have criticised the government for stopping the R350 social relief of distress grant which was introduced to address poverty at ...
News
1 year ago

Thuli Madonsela called for politicians' "perks" to be done away with and the funds used for the distress grant.
News
1 year ago

Vaccine patent waiver will not be enough -WTO chief

Waiving intellectual property rights for COVID-19 vaccines will not be enough to narrow the huge supply gap between rich and poor countries, the head ...
News
1 year ago
Next Article