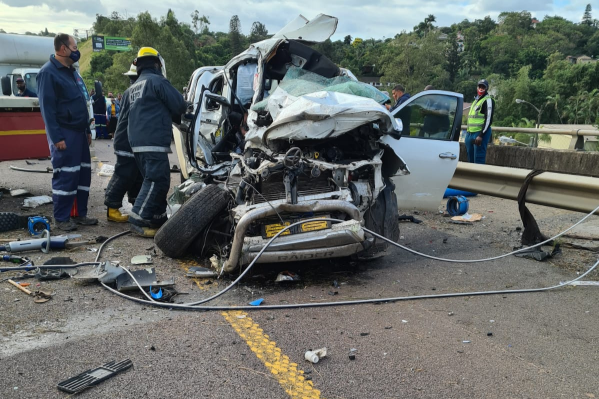 Garrith Jamieson of Advanced Life Support Paramedics said the collision between trucks and bakkies took place around 2pm near on the southbound carriageway of the freeway.

“It is believed a vehicle crossed through from the northbound carriage way, colliding into multiple trucks and vehicles travelling south.

“The entire carriageway has been closed due to this horrific accident.”

Jamieson said paramedics and police struggled to reach the scene as vehicles had obstructed the emergency lane.

“Paramedics found three bakkies and two trucks had collided. Unfortunately two people sustained major injuries and there was nothing paramedics could do for them. They were declared deceased on the scene.

“A further three occupants sustained serious injuries and were stabilised on the scene before being rushed to nearby hospitals for urgent care.”

WATCH | Utah sisters, 9 and 4, crash parents' car on the way to California to 'swim in the ocean'

What started off as an "adventure" to go to California to "swim in the ocean" ended in a minor accident and serious damage to two vehicles.
News
1 year ago

Robbers who shot dead a security guard abandoned their loot after being involved in a car crash.
News
1 year ago
Next Article