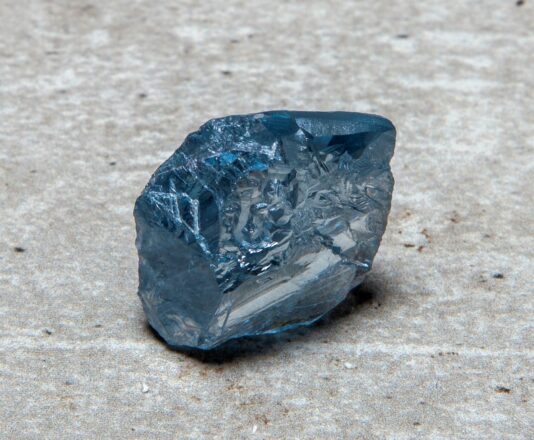 The rare 39.34 carat Type IIb blue diamond recovered at Cullinan on April 1 2021. It is expected to go on auction next month.
Image: Petra Diamonds

A rare 39.34 carat Type IIb blue diamond recovered at Petra Diamonds' Cullinan mine is set to go on auction in July.

Petra said the famed Cullinan Diamond Mine, located at the foothills of the Magaliesberg mountain range, 37km northeast of Pretoria, is renowned as a source of large, high-quality gem diamonds, including Type II stones, as well as being the world’s most important source of very rare blue diamonds.

Petra said the unique geology of the Cullinan kimberlite pipe means that the majority of its diamonds are aged between 3.2 and 1.1 billion years old — spanning a time in the Earth’s history from before the formation of the first major continents to the beginnings of multicellular life.

However, Petra said Type IIb blue diamonds are so rare that their age has not been established.

African miner Petra Diamonds’ , which has high debt levels, aims to be cash flow positive in the second half of the year and will then be able to ...
Business
2 years ago

The company said the Cullinan mine earned its place in history with the discovery of the Cullinan diamond in 1905, the largest rough gem diamond ever found, at 3,106 carats. It said many of the most famous diamonds in the world come from the Cullinan mine.

More recently, remarkable diamonds recovered by Petra at the mine include:

The company said the tender on Petra’s online bidding platform is planned to close on July 12.