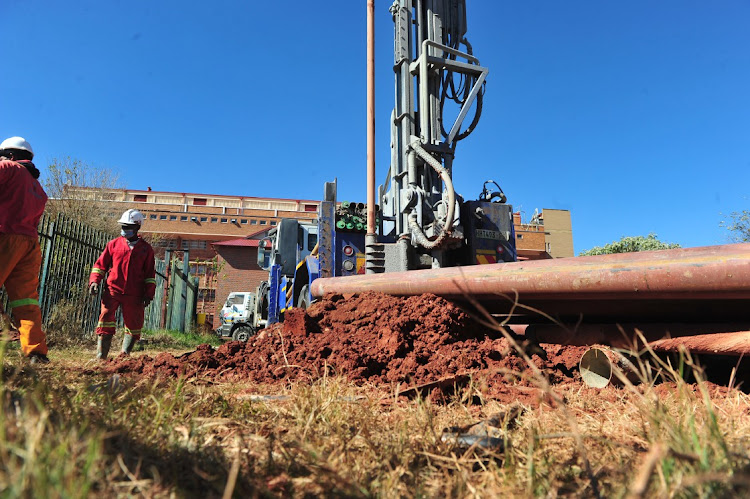 Gift of the Givers have taken the initiative to help out with the water crisis faced by Rahima Moosa Hospital and Helen Joseph Hospital by drilling for water at the hospitals.
Image: Thulani Mbele

This is a desperate call by humanitarian organisation Gift of the Givers, which has stepped in to help as the water crisis threatens to cripple services at two Johannesburg hospitals.

Rahima Moosa Mother & Child Hospital in Coronationville and Helen Joseph Hospital in Auckland Park have not had water for more than a week due to power outages because of power failure at the Eikenhof substation.

This led to parts of Johannesburg and Roodepoort with little inflow or no water at all. Other areas of Johannesburg, including where the hospitals are situated, still don't have water supply.

Yesterday, Joburg Water and Rand Water said in a joint statement that the latter undertook a pre-isolation shutdown at Eikenhof pumping station to prepare for the replacement of a valve.

"During the pre-isolation shutdown, a power failure was experienced at the Vereeniging water treatment plant which affected supply to the Hursthill system. The Hursthill system has, following the shutdown and restoration, battled to recover the acceptable reservoir levels.

"The system supplies high-lying areas that have historically been vulnerable to bulk water supply during high demand seasons. Over the past years, the bulk supply system has also been under severe pressure due to the increased water demand."

Gift of the Givers founder Imtiaz Sooliman told Sowetan yesterday: "We need more water. We are hoping for sponsors to come forward."

He said they have budgeted more than R550,000 for the borehole and their drilling team is currently on site at Rahima Moosa.

"We don't know how much the borehole will cost until everything is complete," said Sooliman.

Head of the drilling team Martyn Landmann said they started digging yesterday morning and it might take two to three days to finish.

"We have dug 48m and found water at 46m but there is still a long way to go as we have to instal casings in the borehole to support it from collapsing before we drill further," said Landmann.

Wazeer Wade said working at the canteen at Helen Joseph has not been easy.

Wade, 41, who has been working at the canteen for two and half years, said: “We need water in order to operate. We need water to wash our vegetables, cook our food, wash our hands and keep our environment clean. This is really hampering us.”

Wade said they have to fetch water from a temporary water tank at the hospital.

“We have been taking five 20l buckets every hour from the Jojo tank. It is a struggle. We are not operating as fast as we can. We can’t wash our hands, pots, pans or clean floors. We are losing business. People are no longer willing to wait for us to fetch water so that we can serve them,” said Wade.

Wade’s son, who asked not to be named, said they had to use buckets to flush toilets.

A mother, who has a pregnant daughter hospitalised at Rahima Moosa, said she had to bring water for her child due to the water crisis.

Meanwhile, people who want to donate bottled water to Gift of the Givers should contact Fayim Bayat on 063-694-9466. Bottled water has to be in bulk loads from corporates, Sooliman said.

City Power spokesperson Isaac Mangena said they are still working on the power failure that affected the water supply.

“We managed to restore the power supply on Sunday by repairing the feeder board system. We have been working with both Rand Water and Joburg Water to find a long-lasting solution to the water supply problem. We are planning on upgrading the Hursthill substation that supplies electricity to the reservoirs that supply water to areas and hospitals around the Hursthill depot.

"We continue to stock to our maintenance plans to maintain critical substations such as Eikenhof pump station and add another transformer so that we deal with the demands for electricity in the area,” said Mangena.

Rand Water and Joburg Water said they had technical teams working to resolve the problem.

Gauteng's health department has raised concerns about the knock-on effects of water disruptions in Johannesburg on facilities such as Helen Joseph ...
News
1 year ago

The Johannesburg west and south, Soweto, Roodepoort and Randburg areas will be affected by the water outages, said Joburg Water.
News
1 year ago
Next Article