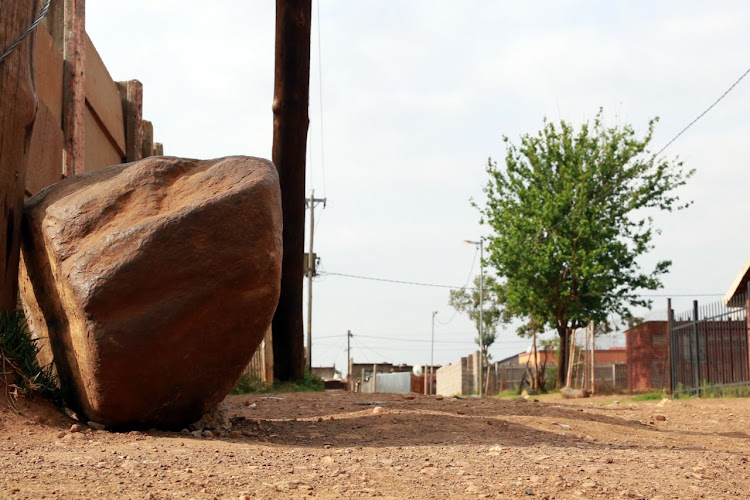 Infrastructural development in the area is likely to be delayed because the shack settlement has been built on dolomite. File image of Orange Farm, south of Johannesburg.
Image: Thapelo Morebudi

Sound travels clearly in the hills around Orange Farm, south of Johannesburg. And amid the drone of the two north-south arteries there— the N1 and Golden highways — the steady murmurs of newly built residential areas are unmistakable. The rattle of shacks being built. The chatter of businesses being run. The mutiny of children running from street to street. The irritation of parents calling them home.

Some of the shack settlements that make up this new wave of development have been named for their location. Mountain View, for instance, built atop one of the hills, enjoys panoramic views. Others owe their names to cultural images of Johannesburg’s unequal development. Tjovitjo, for one, shares its name with a popular television series that followed the struggles of a group of pantsula dancers in the city’s shack settlements.

Tjovitjo the place was established in late 2017 and has been built in-between the two nearby highways. Like most of SA’s land occupations, it was won among the bedlam of police fire and a film of teargas. But Tjovitjo the idea emerged a decade earlier, when a group of young Orange Farm Extension 9 backyarders began to organise their occupation.

Most of the people who now call Tjovitjo home — residents estimate there could be up to 8,000 — are internal migrants, having moved from backyard shacks elsewhere in the province.

Busisiwe Makhoba is one of them. Originally from Soweto, Makhoba has built a two-bedroom shack for her two sons — a slight 11-year-old who loves football and a burly 17-year-old who prefers rugby — and their wary six-month-old kitten, Magirl. (Makhoba loves pets so much that her friends have taken to calling her “crazy”.)

Khutsong township embodies much of what has gone wrong on the fringes of old mining towns that have been in decline for decades, leaving behind ...
News
8 months ago

Like many mothers in Tjovitjo, the 35-year-old moved to the settlement so she no longer had to spend her children’s support grants on rent.

“I don’t live with stress anymore,” she says.

Other Tjovitjo residents have come from further afield — the Free State, Mpumalanga, Lesotho, Zimbabwe — to build their homes.

The Gauteng City Region Observatory estimates that about 1.5 million people move into Gauteng every three years. With the province’s housing and other infrastructure largely failing to accommodate the migration, many are building homes on the expanses of open land in Orange Farm and other areas in the south of Johannesburg.

But if the efforts of Tjovitjans and other shack dwellers to develop the land in Johannesburg’s deep south are comparatively new above the ground, then a key player in that development has been ageing below it for millennia.

SA’s dolomitic rock deposits are concentrated in one big smudge over the border between North West and the Northern Cape, around Vaalboschhoek — when the Arthington Memorial Church was completed using dolomite quarried from this smudge in 1933, it was described as a “symphony in stone” — and three vascular seams further north.

Like gold, dolomite has always been a political mineral. Its traces can be found in the minutiae of shack dwellers’ struggles for development at the municipal level right up to the grandest stages of South African politics.

One of these runs the curve of a crescent moon between Polokwane and Mbombela, another runs along the southern edge of the Magaliesberg mountain range from Mmabatho to Tshwane and the third juts out from Klerksdorp to Johannesburg.

A dull-looking combination of calcium and magnesium, dolomite lies below a full quarter of Gauteng, including swathes of land in the south of the province. While the rock is often unevenly distributed across even small stretches of land, it is likely that at least parts of Tjovitjo, and other shack settlements in the area, are being built on top of dolomite.

Dolomite dissolves in water and the older it is, the easier it dissolves.

Gauteng’s dolomite, which is estimated to be about 2.3 billion years old, is among the oldest on the planet. Where gold shaped the lives of impoverished people on the Witwatersrand in the 20th century, the age of the region’s dolomite means that it may become the mineral that has the biggest say in their lives in the 21st.

As it seeps through faults in the rock, rainwater and percolating groundwater gradually dissolve dolomite and form cave systems that can cause catastrophic ground movement on the surface, such as sinkholes.

Some of this is a result of groundwater levels dropping after it is pumped to the surface using boreholes. Some of it happens when mines pump water out of their underground workings. But a lot of it is the result of water seepage from sewers, water pipes and stormwater systems.

Technical experts agree that it is possible to build on dolomite. Indeed, most of Lenasia and Centurion have been built on top of dolomitic deposits. The Gautrain has also been built on the unpredictable rock.

SA’s regulations and standards for building on dolomite — which have been steadily refined since the 1970s — relate mostly to brick-and-mortar buildings with formal water infrastructure such as flushing toilets and piped water, however. These have little bearing on the realities of shack settlements.

Geotechnical auspices, such as dolomite, have often been used for the demolition and removal of shack settlements. Courts have found that forced relocations as a result of dolomitic sinkholes are substantially different to evictions. But dolomite serves to delay even more regularly than it serves to destroy.

Having occupied and defended the vacant land on which the settlement has developed, Tjovitjans are adamant that municipal services and development are the next steps. The rock below their feet means it may be a long fight. The dangers of developing on dolomitic land have been raised at various turns during the decades-long struggles for development in nearby and long-established shack settlements such as Thembelihle and Slovo Park.

After more than two decades of deferred development, the residents of Slovo Park won a ground-breaking 2016 high court victory compelling the City of Johannesburg to apply for the requisite funding to upgrade their settlement. Despite the success, little more than electricity has been installed at Slovo Park in the half-decade since.

Like gold, dolomite has always been a political mineral. Its traces can be found in the minutiae of shack dwellers’ struggles for development at the municipal level right up to the grandest stages of South African politics.

While department of public works and infrastructure guidelines acknowledge that “in a climate of increasing awareness of individual rights, it is apparent that failure to proactively manage dolomite risk may constitute dereliction of duty”, for instance, former public protector Thuli Madonsela’s “Secure in Comfort” report found that R20m of the department’s dolomite risk management programme was reallocated to the upgrades of then-president Jacob Zuma’s home at Nkandla.

‘Safe in the rain’

The further people live from jobs, the likelier they are to be unemployed. In economic studies of American cities, this has been called spatial mismatch, and research by the Socio-Economic Rights Institute of South Africa in 2016 confirmed that SA’s metro areas were characterised by similar spatial mismatch.

The areas around Tjovitjo are particularly egregious examples. Unemployment rates are up to 14 percentage points higher for people living in Orange Farm, for instance, than for those living in Johannesburg’s city centre.

Employment deserts on the fringes of our cities mean that the erection of shack settlements is often assumed to be an economic act. Impoverished people unable to afford housing on the open market, so the argument goes, are left with the options of far-flung and limited state housing or building their own homes on vacant land nearer to economic opportunities.

Tjovitjans are adamant that their struggle to secure land comes before their efforts to find work. In the words of 36-year-old Nkosinathi Malembe, “What is work without land?”

The youngest of his three daughters is now 18 months old and was born in the settlement. He grins whenever he uses her nickname: Little Tjovitjo.

Makhoba agrees. Despite having been without work for three years now, she is more fixed on securing a home than an income. “Even if I go into this earth when I die,” she says, “I can say I left my children a home. I will not leave my children with rent.”