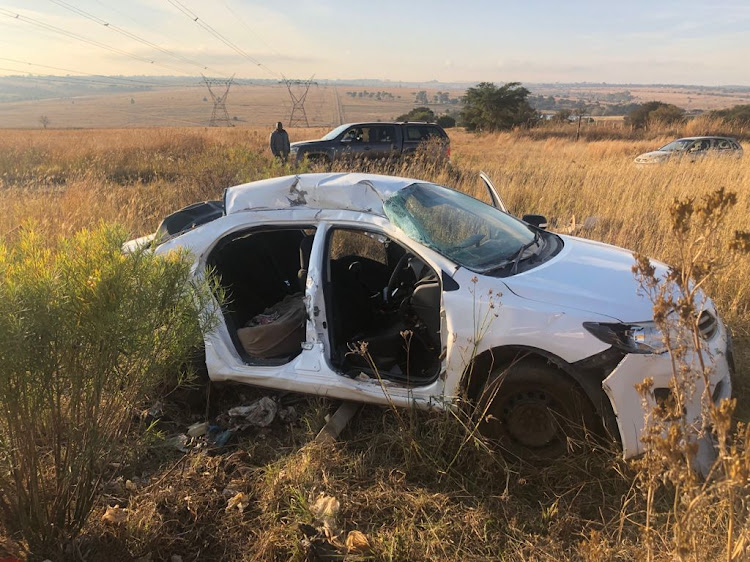 Three people, including two children, were killed when a bus crashed into the side of a light motor vehicle on the R511 in Centurion.
Image: ER24

Three people, including two children, were killed when a bus crashed into the side of a light motor vehicle on the R511 in Centurion, paramedics said on Monday.

Two other people were injured.

ER24 spokesperson Russel Meiring said paramedics and other services arrived on the scene at 6.50am.

The bus was in the middle of the road while the light motor vehicle was in the veld.

"Medics assessed the patients and found that the woman and child outside the vehicle had already succumbed to their injuries. Nothing could be done for them, and they were declared dead.

"The child in the car was in a critical condition, while the two women had sustained moderate injuries. The six-month-old fortunately escaped injury. Medics treated the patients and provided the child with advanced life support interventions. Unfortunately, despite their efforts, the critically injured child succumbed to his injuries."

Once treated, the two women were transported to a nearby hospital for further care.

No-one in the bus was injured, said Meiring.

Authorities were on the scene for further investigations.

Student falls to his death at Walter Sisulu University

A third-year student at Walter Sisulu University fell to his death from a balcony at the Nelson Mandela Drive campus in Mthatha on Saturday night.
News
7 months ago

Five people were injured when a minibus taxi crashed into a Johannesburg shop on Thursday afternoon.
News
7 months ago
Next Article