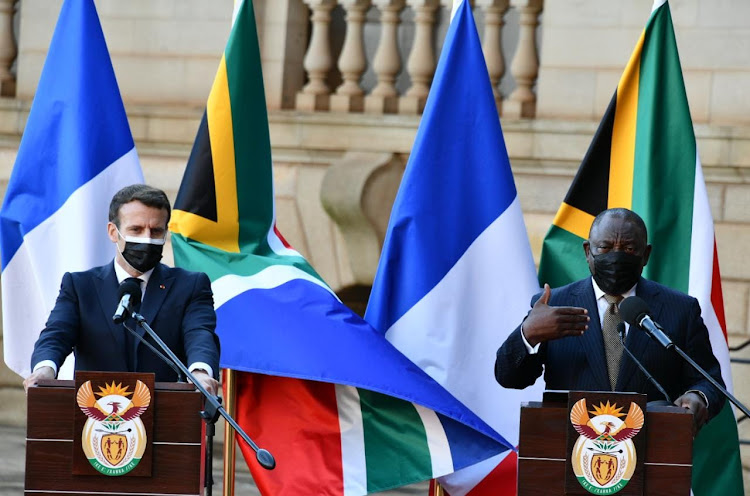 French President Emmanuel Macron and SA's Cyril Ramaphosa met on Friday, where they discussed various topics including the fight against Covid-19.
Image: gcis

In a bid to assist struggling African countries fight the deadly Covid-19 pandemic, President Cyril Ramaphosa on Friday announced that France has committed to contribute 30 million vaccine doses to the Covax facility.

“As African countries, we are immensely grateful to the government of France for its ongoing support of Africa’s vaccine acquisition. We welcome France’s recent contribution of an additional 30 million doses to Covax and 500 million euros in multilateral funds to buy diagnostics, therapeutics and vaccines,” said Ramaphosa.

He was speaking during a high-level dialogue on the future of vaccine manufacturing in Africa at the University of Pretoria shortly after holding bilateral talks with French President Emmanuel Macron.

Ramaphosa and his counterpart discussed various issues, including fighting the Covid-19 pandemic, climate change, global peace and security on the continent, and relations between the two countries.

Ramaphosa said Africa can no longer sit back and wait for Covid-19 vaccines.

“We cannot continue to wait in the queue for life-saving Covid-19 vaccines. The longer we wait the more lives are put at risk,” said Ramaphosa.

He said Africa’s response to the pandemic has been united, co-ordinated and comprehensive from the outset.

“We set up the ground-breaking African medical supplies platform to ensure that all countries in need have access to diagnostics, therapeutics and personal protective equipment.”

“Africa centres for disease control and prevention — the CDC — has also played an important role in the continental response, ensuring we can pool resources and expertise.”

Ramaphosa added: “Last year, we set up the African Vaccine Acquisition Task Team (AVATT) to secure vaccines for the continent. It has done excellent work through its engagements with the Covax facility and directly with vaccine manufacturers.”

President Emmanuel Macron said on Friday France would invest in boosting the production of COVID-19 vaccines in Africa, to help close a gap in the ...
News
1 year ago

To date, less than half of 1% of the continent’s population is fully vaccinated because access has been  a challenge.

“Vaccines are flooding into upper-income countries but are trickling into Africa. This runs completely contrary to our aspirations to build a world founded on human rights for all. It also undermines the global effort to defeat this coronavirus; for as long as the virus continues to spread in one part of the world, it remains a threat to the whole world.”

Ramaphosa welcomed an undertaking to donate vaccines to low-income countries.

“We will also need the support of industry for investment, capacity-building, and intellectual property and technology transfer. I want to make a call to multinational pharmaceutical companies to reconsider their opposition to the TRIPS waiver.”

He said allowing all countries to manufacture their own vaccines is not about developed countries or pharmaceutical companies extending their largesse to SA. “This is a matter of social justice and human rights, the most important of them being the right to life. Vaccines are and must remain a public good.”

Macron’s commitment and support for SA and African states to manufacture their own vaccines was welcomed.

“We are immensely encouraged by the French government’s support for SA’s science and innovation research in the form of expertise deployment, study scholarships, funding and tech transfer.

He also thanked Germany for its support of this initiative to boost SA’s vaccine manufacturing capability.

Earlier, Macron told the media during a press briefing outside the Union Buildings that it was important to “lift the hurdles” to allow Africa to manufacture its own vaccines as soon as possible.

France has committed to contributing 30 million vaccine doses by the end of 2021, with the aim of increasing the number at a later stage.

“When we talk about barriers, we need to have more transparency. We are paying and giving a lot of money to many structures but we do not know how much is being paid to buy these vaccines. We suspect that the poorest are paying the highest price,” Macron said.

He added that, “In our system we also want responsibility and transparency in all international mechanisms for the prices.”

Access to Covid-19 vaccinations is already a "rich man, poor man" tale after less than two weeks.
News
1 year ago

During the engagement, CAPRISA’s Prof Quarraisha Abdool Karim said various lessons could be learnt from countries that secured vaccines through local manufacturing, the first being the importance of government leadership and political commitment.

Abdool Karim added that it was also critical to collaborate with other countries and continents.

CEO of the SA Health Products Regulatory Authority (Sahpra) Dr Boitumelo Semete-Makotlela said her organisation will be playing a critical role in monitoring vaccines and has developed an app to report any safety related issues to the organisation.

“These harmonised mechanisms enable a number of aspects including joint evaluation process to rely and share each other’s work but what is important for us as a continent is to build capacity for us to be able to efficiently access these regulatory processes.”

Dr Morena Makhoana, who is the CEO of the Biovac Institute, said private-public partnerships were crucial and the pandemic showed that Africa has the capability to manufacture its own vaccines.

Moderna says its Covid-19 vaccine is 'highly effective' in teens

Moderna's Covid-19 vaccine was shown to be effective in adolescents aged 12-17 and showed no new or major safety problems in a clinical trial, the ...
News
1 year ago

Close to 9,000 people over the age of 60 have received the Covid-19 vaccine as the rollout gathers pace.
News
1 year ago