KZN water 'is in a healthy state heading into winter' 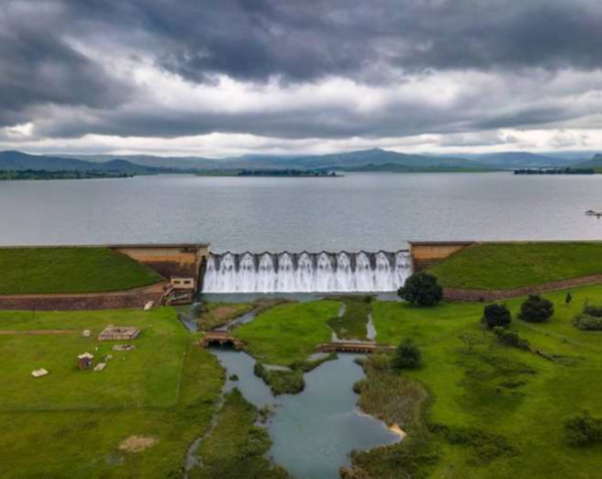 Midmar Dam in Howick continues to spill following good rains in its catchments and maximised pumping from the Mooi River, according to a statement by Umgeni Water.
Image: Umgeni Water

The status of water supply in KZN is healthy as the dry season approaches.

The latest analysis of water resources in Umgeni Water, the largest system in KwaZulu-Natal, which serves four municipalities, was contained in a quarterly report for the period January to April 2021.

In a statement, Umgeni Water spokesperson Shami Harichunder said assessments by the entity showed that the Umgeni, south coast, north coast, upper Thukela and Ixopo systems had adequate water resources to meet full demands during the winter months, and beyond.

Thus there would be no risk of water shortages in this period, he said.

According to the statement, the position has remained stable from the end of April and, as at this week, the total amount of water in storage in the Umgeni system was at 85% of capacity.

This is a vast improvement on the 9% in the corresponding period in 2020.

Reuters reports that SA's Trans-Caledon Tunnel Authority has raised just over R15bn in capital markets to continue construction of the Lesotho ...
News
11 months ago

The municipalities of eThekwini, uMgungundlovu, Msunduzi and the northern parts of Ugu receive water abstracted and treated in the Umgeni system.

Furthermore the six main dams in the system, Spring Grove, Mearns, Midmar, Albert Falls, Nagle and Inanda, have levels between 56% and 100%.

“The largest of these dams, Albert Falls, is at 54% and continues to rise as a result of spills from Midmar Dam, which remains full.

“A year ago, Albert Falls was at 44%. The strong state of Midmar Dam has been supported by pumping from Spring Grove and Mearns dams and from the Mooi River. Analysis shows that if pumping did not take place, Midmar Dam would have been at 53% at the beginning of May 2021,” Harichunder said.

Meanwhile the four dams, Spioenkop, Wagensdrift, Woodstock and Olifantskop, that make up  the upper Thukela water system of the uThukela district — are at levels of between 99% and 102%.

“There are adequate water resources to meet the full needs of the supply areas of the water treatment works that receive water from these dams. Similarly, there is no risk of water shortages occurring during the winter months and beyond.”

Residents of a KwaZulu-Natal south coast community are rejoicing after water flowed from their taps for the first time in eight months on Monday.
News
11 months ago

In the south coast water system, the total raw water storage is about 100%, “also a healthy situation for the winter months”.

The Nungwane dam is overflowing at 101% while the Umzinto and EJ Smith dams are at 93% and 98% respectively.

The three dams supply Umzinto, Scottburgh, Pennington and surrounding towns and villages through the water treatment plant in Umzinto.

“Inland of Umzinto, the Mhlabatshane Dam is at 97%. This dam supplies the water treatment works in Mhlabatshane for bulk delivery to the reticulation network of Ugu.

“The strong levels of these dams is because of above-average rainfall from January to April.”

North of Durban, Hazelmere Dam is at 52% of its new capacity (doubled since its wall was raised).

However, according to the report, part of work on the dam remains unfinished.

“In the absence of completion of work, dam safety requirements make it imperative for the dam to be kept under 53%. Once the dam wall project has been completed, full impoundment of the dam can begin. There are no concerns over raw water shortages occurring in the near future.”

In the Ixopo system, which supplies Ixopo and surrounding areas, the Home Farm Dam is overflowing at 106%.

According to the SA Weather Service report from January to April this year, the La Niña conditions are likely to weaken and return to a neutral state.

This could result in normal to below-normal rainfall from June to August, particularly for KZN and including Umgeni Water’s operational area.