This teacher deserves to rot in jail, fumes child's great-grandmother 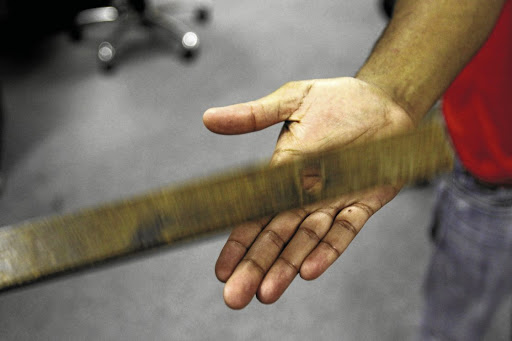 A teacher has been given marching orders after beating up a pupil.
Image: Mark Andrews

A Pretoria teacher who was caught on video slapping a Grade R pupil several times on the head has been fired.

The incident, which happened at Nchuncheko Primary School in Soshanguve, north of Pretoria, on Thursday, was recorded in a video clip that went viral last week.

A disciplinary hearing was held yesterday, where the decision was taken that the teacher be dismissed with immediate effect.

Chauke told Sowetan that the teacher at the centre of the storm had pleaded for leniency. She started teaching at the school in 2002.

Gauteng education department spokesperson Steve Mabona said the disciplinary hearing processes went as planned and the outcome would be made available.

The grade R pupil's great-grandmother, Jostine Seabela, 57, said as a family they were relieved that justice has been served but wanted a criminal case to be pursued. “Dismissal is not enough, this teacher deserves to rot in jail,” said Seabela.

Seabela told Sowetan that the teacher had called her after the video went viral and asked Seabela to cover for her “to save her job” by saying she's the one that had given her permission to beat the child.

In the video clip that went viral on social media, the teacher can be seen slapping the five-year-old boy at least four times on the head.

The incident resulted in parents embarking on a protest, calling for the teacher to be immediately removed from the school.

Seabela also suggested that the department should appoint full-time social workers at schools for them to help detect abuse early.

Phumzile Mahlangu, 34, a parent, said the dismissal of the teacher was the best decision because members of the community were unhappy about the incident.

Mahlangu said she fears the community could have taken the law into their own hands as they were adamant they didn't want the teacher at the school any more.

An earlier version of the story incorrectly attributed confirmation on the dismissal of the teacher to Gauteng education department spokesperson Steve Mabona. We regret that the error was introduced in editing.

It took a protest by parents to get the department of education in Gauteng to suspend a teacher who was filmed meting out corporal punishment to a ...
News
6 months ago

Teachers who administer corporal punishment on pupils will face criminal charges.
News
6 months ago
Next Article