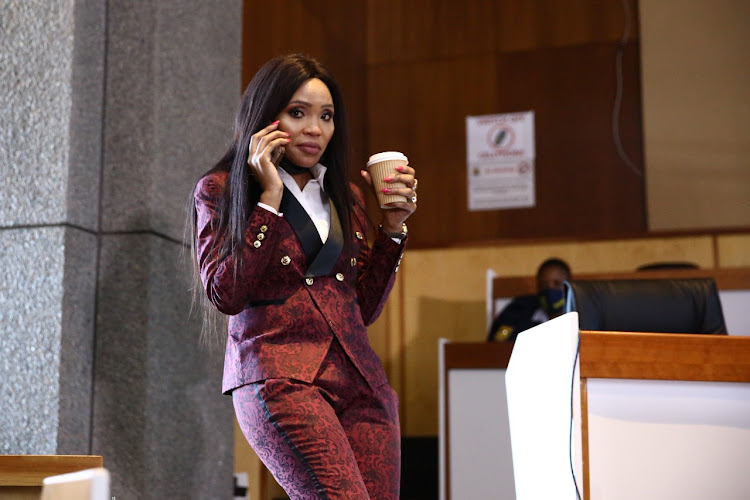 Norma Mngoma testified that a passport which contained details of the private trips she undertook overseas disappeared before she could present copies to the state capture inquiry.
Image: Thapelo Morebudi/Sunday Times

Former cabinet minister Malusi Gigaba’s estranged wife Norma Mngoma alleged on Friday that her passport, which contained information about the private trips she undertook, was lost just before she could present copies of the date stamps to the state capture inquiry.

She alleged one of the trips was paid for by Ajay Gupta.

Mngoma told the inquiry, chaired by deputy chief justice Raymond Zondo, she had made copies of the information contained in her passport because she wanted to inform the inquiry about the exact dates she undertook the trips.

She said when she went to meet the inquiry’s staff earlier this year, she forgot to take the copies.

“When I got home my passport was not there and the copies were not there. [Gigaba] is the only one who can come into our house.”

Mngoma said she asked to have her passport returned but Gigaba denied taking it.

Mngoma said the “theft” was to ensure she did not have proof of those trips.

She said Gigaba also did not want the inquiry to have proof of trips the couple took to Dubai.

“There is a trip I remember when we stayed at the Hilton in Dubai. [Gigaba] said Ajay will sort out the trip for us,” Mngoma said.

Mngoma testified that Gupta came to Dubai and said he wanted Gigaba to meet people there.

Mngoma said the itineraries for those trips and pictures she took on the trips were deleted when the Hawks confiscated her electronic devices when she was arrested last year.

Mngoma said pictures of official visits with Gigaba were not deleted, except for one she took in Mumbai, India, during an official visit.

“That is the only state visit picture that was deleted. It is very strange that members of the Hawks never travelled with us, but they know which pictures to delete.”

Mngoma said there were pictures she took in Greece when she travelled with a friend where she had paid for the trip. She said those pictures were not deleted.

Mngoma insisted Gupta had agreed to give more than R400,000 to assist Gigaba’s sister, who was blacklisted.

In his affidavit before the inquiry, Gigaba said: “I do not know who my sister was indebted to, but I do know she disposed of her assets to discharge her liability.”

Gigaba said he assisted his sister with basics such as groceries and petrol.

“The allegation that I would ask Ajay Gupta for money is denied as scurrilous,” Gigaba said in his affidavit.

Mngoma said she remembers visiting KwaZulu-Natal where Gigaba met with his father to discuss the problems his sister was experiencing.

On their way back to Gauteng, Mngoma said Gigaba had told her he must assist his sister, who had an optometrist practice in Port Shepstone, to find another job because she was not employable and was blacklisted.

Mngoma said Gigaba had told her his sister needed R850,000.

“Two days later Malusi said he was going to talk to them.”

Mngoma said following the meeting, Gigaba told her Gupta would not give him the full amount but would give them half.

Mngoma has concluded her testimony.

She will return at a later date after Zondo granted Gigaba leave to cross-examine Mngoma.

Former cabinet minister Malusi Gigaba has downplayed a security threat that forced the state capture commission to adjourn the testimony of his ...
News
6 months ago