“The aim was to buy something to eat because we were hungry and also wanted to support local businesses. It was not vote buying. I apologise sincerely.” 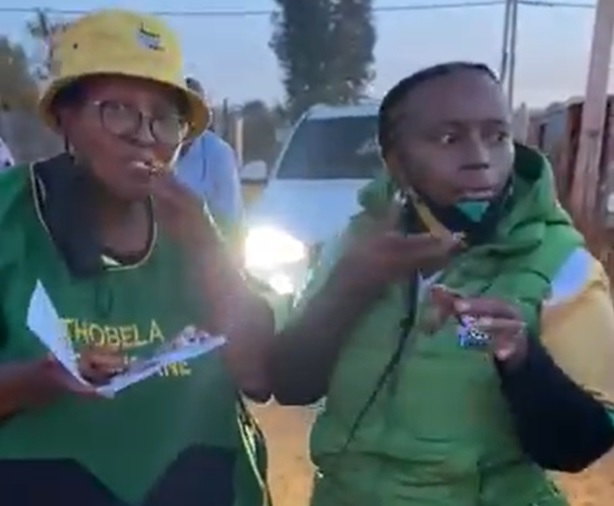 “For the sake of the vote!”

Those are the words of Loyiso Masuku, Johannesburg ANC deputy secretary and member of the mayoral committee for corporate and shared services.

Masuku and Gauteng community safety MEC Faith Mazibuko, feature in a video doing the rounds on social media where they appear to be belittling the same voter base they are trying to recruit from.

The two, together with other ANC members, are seen eating chicken feet at an informal settlement in Ennerdale, Joburg as part of their campaign trail for the by-elections held on Wednesday.

But Masuku is heard remarking that the two ANC high-flyers are only eating chicken feet for the sake of the vote.

“For the sake of the vote, sivale istolo sawathenga wonke amaninqina (we closed down the store and bought all the chicken feet), sold out!” Masuku says in the video.

The other ANC member can be heard saying that they are only eating the chicken feet because they want votes.

“Manqinas (the chicken feet) are sold out, local economy! Bayayazi bavotela uANC (they know they are voting for the ANC),” Mazibuko says in the video.

Braaied chicken feet are a common feature in many poorer townships and informal settlements around the country.

They are commonly sold by street vendors and are a cheap source of protein.

Mazibuko and Masuku have since issued apologies for the video.

“There is a video circulating on social media where I am eating chicken feet during a door-to-door yesterday. It is known that wherever I go, I buy food in the community to support the local economy. Fat [cakes] are my favourite. But I decided to apologise because there were things said [on the video] that may not sit well with people.

“The aim was to buy something to eat because we were hungry and also wanted to support local businesses. It was not vote buying. I apologise sincerely,” wrote Mazibuko.

#LoyisoMasuku says the comment “for the sake of the vote” was in reference to working long hours doing their elections work. She apologies for the misunderstanding it may have caused. #sabcnews pic.twitter.com/NXRZmsro4k

In her apology posted on Twitter on Thursday Masuku said the video was taken out of context.

“We made a quick stop for food because we were really hungry and had been working throughout the day doing door-to-door creating awareness on by-elections and the voting process. The clip has been cut and shows only bits and pieces without the full context,” said Masuku.

“The child next to us was with the woman from which we bought amanqina. An earlier part of the clip showing the child eating is also available. The comment about the "for the sake of the vote" was in reference to working long hours doing our elections campaign work and not in any way to voters.

“To an extent where I asked Cde Faith why the manqina are red and she said they have Chilli & I told her I don't eat chilli food but because I'm starving let me try. It was in no way directed at anybody and I sincerely apologize for the misunderstanding. Ndiyaxolisa Bethunana,” said Masuku.