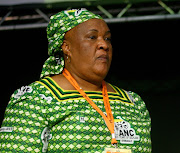 A Free State MEC has vowed to drag embattled Mangaung Metro municipal manager to court next week and force him to take leave while his alleged maladministration is being investigated.

Cooperative Governance and Traditional Affairs (Cogta) MEC Thembeni Nxangisa has promised to force Tankiso Mea to go on leave and allow the investigation into his alleged misconduct to go smoothly.

On Wednesday, the Mangaung Concerned Citizen (MCC), which has been behind this week’s service delivery protest action, met with Nxangisa and Premier Sisi Ntombela and they agreed to suspend the protest action until next week to give the two government offices time to try to persuade Mea to take leave.

A council meeting that was supposed to sit on Thursday, and expected to vote and decide Mea’s fate, experienced delays and Mangaung municipal spokesperson Qondile Khedama said the meeting was likely to be postponed to next week on a technicality.

However, Nxangisa has already taken a decision to drag Mea to court in order to enforce his leave.

“The MEC feels that Mea’s presence in office would disrupt the investigation that he is facing. The MEC wants him to go on leave and there is a concession that for order to prevail Mea must temporary leave his office,” said provincial Cogta spokesperson Tembeni Lobe.

MCC leader Themba Zweni confirmed that the protest action has been put on hold until Tuesday. He also added that it was important for Mea to go on leave. “When the municipality was put under administration in 2019 December, he (Mea) blocked (the) administrators from accessing important critical financial information. Because of him, the city was not collaborating with the administrators,” said Zweni.

He said the protest action was supposed to have been staged only on Monday but it was extended because the premier delayed her meeting with the residents and this resulted to disinformation on Tuesday that the protest action had been suspended.

“We had to close ranks on Wednesday to show that the protest was far from being over,” said Zweni.